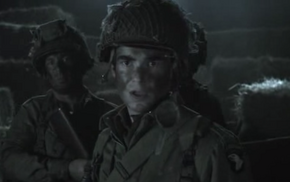 Captain Jack Zimmerman was an officer of the United States Army.

He was part of Fox Company, 101st Airborne and was among the first soldiers to land in Normandy on D-Day. While making their way to Utah Beach, he and his troops encountered Nigel Griffin, who convinced Zimmerman to help him raid a secret Nazi compound where Helen Magnus and James Watson were being held.

Later on, Captain Zimmerman led the assault on another compound where a fire elemental was going to be used against the Allied invasion fleet. During the firefight, he was hit by a bullet and killed. His sergeant described him to Helen Magnus as "one of the best".

Captain Zimmerman was played by Robin Dunne; although never stated in the episode, it can be assumed that he was an ancestor or close relative of Will Zimmerman, possibly his grandfather.

Retrieved from "https://sanctuary.fandom.com/wiki/Jack_Zimmerman?oldid=11193"
Community content is available under CC-BY-SA unless otherwise noted.