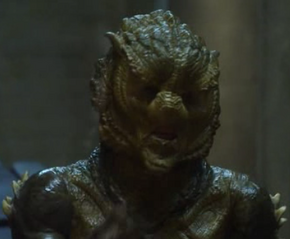 Jack is a reptiloid abnormal who has been under the care of the Sanctuary Network for several years. When he came in contact with the fungus Cordyceps Siberienses, his ACTH levels of the were increased causing extremely violent behavior. While in this state he infested Rachel with his spores.[1]

Retrieved from "https://sanctuary.fandom.com/wiki/Jack?oldid=7367"
Community content is available under CC-BY-SA unless otherwise noted.