Start a Wiki
Into The Black 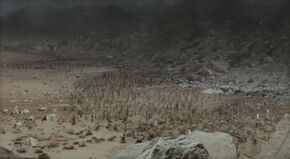 The Abnormal armies reach the surface.

"Into The Black" is the twentieth episode of the third season of Sanctuary, and the forty-sixth episode overall in the series.

It is the Season 3 Finale.

A group of Abnormals has to be contained, and Magnus finds herself in a jurisdictional battle with the UN and a private security firm that wants to seize control of the Abnormals and take over the project from the Sanctuary Network.

At the Old City Sanctuary, Dr. Helen Magnus, Dr. Will Zimmerman, and Henry Foss attend a video conference with Dr. Lilian Lee of the United Nations and Gen. Villanova of the Lotus Defense Corps. The general explains that his men have established a perimeter around an affected area in South Dakota, and sends them a camera feed of a group of Abnormals coming to the surface from Hollow Earth.

General Villanova requests authority to arrest and contain the Abnormals, but Magnus questions his expertise in the area. She wants full jurisdiction and asks Dr. Lee to put the newcomers under the care of the Sanctuary Network. Villanova says that the LDC troops can take care of capturing the abnormals and deliver them to Magnus. To the Sanctuary team's irritation, Dr. Lee agrees to his proposal.

Will and Kate Freelander make contact with Lt. Coxswell of the LDC troops, who explains that they will treat the abnormals as criminals as long as there is no proof to the contrary. A large military camp for hundreds of people is being set up.

Back in the Sanctuary, Henry points out that it is getting ever harder to keep the Abnormal world secret, and that this latest incident might provide them an opportunity to introduce the world to the Sanctuary Network's work. Magnus however, believes that the world is not ready, and mentions that she tried something similar in the late 1940s, and it did not go well. Magnus contacts Dr. Lee again, who informs her that her superiors have established a force that will act over the head of Sanctuary.

In the camp, the first truckloads of abnormals arrive, including a Troll and several Herusans. Will spots Fallon, the former chief of staff to Ranna Seneschal, and takes her to Magnus' office. The young woman explains that she and her fellow rebels were declared traitors and narrowly escaped into the outlands of Hollow Earth. Martial law was declared in Praxis, but some time later, the power went out and rumors surfaced that Praxis had been attacked. The rebels eventually decided that they had no other choice than to try and reach the surface.

Magnus briefs Dr. Lee, General Villanova, and other world leaders on what she learned from Fallon. There is still no contact with Ranna or anyone in Praxis; the abnormal rebels only wish to live as they did in Hollow Earth; Villanova points out that that is not possible on the surface when Henry calls Magnus away. He leads her to a hallway where Will escorts a newcomer to her: John Druitt has returned to inform them that Adam Worth is alive and they all are in grave danger.

In the abnormal holding camp, Kate notices that the abnormals will not accepts help or gifts from humans. She notices a Herusan jewelry maker, who gives her a necklace and introduces herself as Garris. His flirting with her is noticed by some other Herusans, who do not seem too happy about it.

Meanwhile, Magnus angrily demands an explanation from Druitt, who explains how her was about to kill Adam; however, Adam explained that he wanted to use the device he stole from Praxis to travel back in time and save the life of his daughter, Imogene, who died over one hundred years ago. John agreed to help him in exchange for the chance to also go back in time and prevent The Five from injecting themselves with the Source Blood, so that he and Helen could have a happy, yet mortal life without all the hardships that have happened to them. Adam copied the specifications for the device, but then vanished without taking John with him. Druitt and Magnus leave to look for Adam.

Fallon talks to one of her fellow Herusans, Thelo, who is unhappy about the way the humans treat them. She asks him to support her, and he grudgingly promises not to stand in her way. Kate gives a gift to Garris, which causes other Herusans to insult Kate, causing Garris to start a fight. Will talks to Dr. Lee when he sees the fight on one of the video screens.

Magnus and Druitt are on their way to Hollow Earth. They get into a big fight when Magnus points out how selfish his desire to be with a former version of her, with no regard for who she's become during the past one hundred years, truly is. However, their issues are abruptly forgotten when they arrive on a balcony overlooking Praxis – and find the city totally destroyed, in smoking ruins.

Amongst the debris that was once the capital of Hollow Earth, John says that Adam must have made another attempt at activating his machine. Magnus realizes that the events surrounding the Time Dilation Field in Carentan were the first test, which was spoiled by the Fire Elemental she buried in the area in 1944. In the ruins of Ranna's chambers, they find an ornate silver-handled walking stick - Gregory Magnus', Magnus realises with some trepidation.

Will arrives in the camp where Bigfoot and Kate explain the situation. They arrive near a tent where Thelo tries to convince his fellow Herusans not to follow Fallon's path of peace and cooperation any more.

Magnus and Druitt search the tunnels and come upon some working computer systems; Magnus downloads the data and tells John to go back to the surface and warn the others about Praxis.

Kate comes to see Garris, who rebuffs her advances in order to protect her, but denies her any further explanations. Moments later, Will goes to see Fallon and discovers to his horror that she is dead; someone has stabbed her in the side. As if on command, Thelo and other Herusans show up, obviously concluding that Will killed her.

Thelo angrily advances on Will, who makes a tactical retreat and is soon surrounded by a number of Herusans. He tries to fight Thelo, but the much stronger abnormal overpowers him easily. Just when he is about to finish Will off, Bigfoot arrives with several LDC troopers and angrily attacks Thelo. Will is led away to safety.

Back in Hollow Earth, Magnus is working on the computers when she notices some kind of energy discharge.

Henry informs Will about Druitt's return and the destruction of Praxis. Will contacts Dr. Lee and General Villanova, who demand to know why there is now an uprising in the camp. He explains the situation when, suddenly, the security feed from the camp is lost.

Magnus notices another discharge, and looks around for Adam. She finds nothing, but the lights continue to flicker.

When the video feed is restored, Will and the others realize that Thelo and his followers have taken control of the camp's command tent and taken several hostages. They demand their own state to live in, and want it done within two hours; then, they will start killing the hostages, one of which is Bigfoot.

Druitt returns to Magnus, who keeps looking around the cave. Suddenly, the air before the flickers, and Adam Worth appears along with several computer consoles for a few seconds. Magnus realizes that he is actually in the room.

Magnus notes that Adam must be using Praxis' geothermal energy systems to suupport his time machine, and that they must increase the power level in order to overload the rift field he is hiding behind.

Meanwhile, General Villanova asks Dr. Lee for the permission to lead a strike team into the abnormal camp. Will protests, and gets half the time they have left to open up communication with the abnormals. Will and Henry realize that Thelo's plan does not make sense for someone who wants to better their situation, and deduce that the entire affair is a diversion: someone wants to draw all the Sanctuary Networks attention on one matter. It must have something to do with Adam's machine.

Magnus and Druitt increase the power, and Adam appears once more. When Magnus tries to talk him out of his plan, he says that he would do anything to get his daughter back, just as everyone would. Adam explains that he could not go back all the way to 1886, but it would have altered the timeline to much. Adam decided to go to 1898, the year his daughter died, instead. When John disagreed, Adam hid away, forcing John to go back to Magnus. Just as Magnus angrily confronts John once more, Adam disappears behind his rift field again.

Will and Henry discover that Adam met with a number of Hollow Earth tribal leaders in different locations. They check on these locations and discover three abnormal armies beneath dormant volcanic calderas in Chile, Indonesia, and Russia. The entire hostage situation's purpose is to draw attention away from the massive invasion armies marching to the surface now that Praxis is out of the picture. Adam's weapon is likely meant to open the calderas and allow the abnormals to invade the surface.

In Hollow Earth, Druitt connects himself to the power generators, giving the electrical Abnormal inside him the opportunity to feed on enormous amounts of energy. Adam's rift field is overloaded, but he is able to escape through his time portal. Just as John collapses behind her, Magnus follows Adam through the portal.

The energy wave from the time machine forces the calderas open, allowing the Abnormal armies to march to the surface. Will, Henry, Lee, and Villanova can only watch as thousands of abnormal warriors walk out in broad daylight.

Magnus is thrown out of the time portal, and finds herself in late 19th century London.

Thelo
Add a photo to this gallery

Retrieved from "https://sanctuary.fandom.com/wiki/Into_The_Black?oldid=22268"
Community content is available under CC-BY-SA unless otherwise noted.