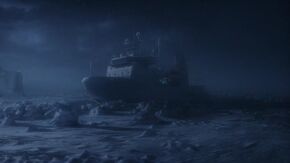 The Russian icebreaker, forzen in the midde of nowhere.

"Icebreaker" is the seventh episode of the fourth season of Sanctuary, and the fifty-third episode overall in the series.

When a team from the UK Sanctuary gets in trouble on a stranded icebreaker in the Bering Sea, Magnus and Will must figure out who is behind the mysterious happenings at sea.

As a Russian icebreaker lies frozen in the middle of a seemingly endless plain of ice, a four-man team of Sanctuary Network agents, including Henry Foss and Declan MacRae tries its best to find a way inside. Henry and Alistair, a fellow werewolf, break open a door and the team proceeds inside, where they find one of the crew shot dead. A crate nearby holds smuggled combat weaponry.

The group makes it to the bridge, which is filled with the bodies of the murdered crew. While Henry checks the ship's engine room, Declan and Terry go looking for the Hollow Earth Abnormals they came for in the first place; they find them all dead as well.

Terry figures that the abnormals killed each other just as the human crew did. As Henry tries to get the ship up and running again, she expresses her horror about what they found. Her colleague, Alistair, tries to comfort her. Some time later, the team hears something outside and draws their weapons, but it turns out to be Dr. Helen Magnus and Dr. Will Zimmerman. After being brought up to speed, Magnus suggests to split up and search the entire vessel.

In one of the cargo holds, Magnus' group finds a number of frozen objects that seem to be alive inside the ice.

Terry theorizes that the creatures are in some kind of hibernation, and Magnus decides to cut one down and thaw it out. She then meets up with Declan's group and informs them that they will set up "home base" in the ship's laboratory. Soon after, Declan discovers more of the creatures in another section. Suddenly, an explosion rocks the ship; one of the team, Murray, is killed in the boiler room.

Meanwhile, Terry discovers that the frozen creatures are Magoi, dangerous abnormals one of which Magnus and Will faced in the Hindu Kush years earlier. They are frozen in fresh water because salt would hypercharge their systems. Just then it turns out the explosion damaged the hull, and the ship is filling with—salt water.

Back in the lab, the team discovers that the creature they took there has left its ice block and has disappeared. Declan and Alistair have also been separated from the rest and each other for a while, so nobody can be sure if they are who they seem to be.

The team begins to move the Magoi, but suddenly a fight breaks out among the men as Terry is found murdered. Henry and Alistair are locked up together, and the work continues without them. They soon find the real Alistair dead in a cargo hold, and rush back to Henry, who sits in front of a dead Magoi.

Henry tells them of a struggle with the creature, but Magnus explains that it was just in his mind. Henry is deeply distraught by the death of Alistair, and blames himself; he swears to name his child after him if it is a boy.

Meanwhile, Declan discovers another melted block of holding ice, suggesting there is at least one more Magoi at large. The team has to continue its work of getting the last ice blocks up, but Henry and Declan are locked in the hold by what they though was Will.

Unable to contact Magnus, the two try to figure out a way to save themselves from the rising water. Suddenly, Declan realizes that he blew the door to the hold open with his weapon when he first entered it: the door is open, the Magoi just made them believe Will locked them in. They make it back to Magnus and team up with her, and suddenly hear from Will.

After finding him, they suddenly hear something behind them; in come Helen Magnus and Will Zimmerman.

The newly arrived Magnus, however, reveals that this is not true by pushing herself into the water with her copy: saltwater actually kills the Magoi. The false Will tries to flee, but is shot by his real counterpart.

On the following morning, Magnus explains to Henry that the fact that Henry and Declan know her and Will so well is the very reason the Magoi could mimick her so flawlessly. The team questions wether they should save the dangerous creatures after they killed the rest of the team, but Magnus tells them they will honor their fallen friends by doing their job: taking the Magoi, who only act as is their nature, to safety in the Sanctuary.

Retrieved from "https://sanctuary.fandom.com/wiki/Icebreaker?oldid=19507"
Community content is available under CC-BY-SA unless otherwise noted.