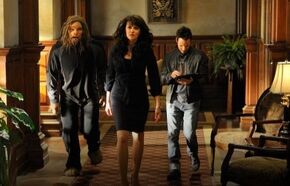 The Sanctuary Team is in trouble once more.

"Homecoming" is the sixth episode of the fourth season of Sanctuary, and the fifty-second episode overall in the series.

Will runs into unexpected trouble, and personal revelations, on a trip to the Liberian Sanctuary in Monrovia. Meanwhile, Magnus has her hands full when a couple of never-do-well flying Abnormals recruit her help with a questionable scheme.

Near the Monrovia Sanctuary, soldiers apprehend a group of protesters in a street. Dr. Will Zimmerman is watching the election-related riots with the local House Head, Yusuf, and they discuss how Magnus' decision to go independent has changed the way they have to deal with unstable governments like that of Liberia.

Back in the Old City Sanctuary, Bigfoot and Henry Foss argue about a birthday present for Will when Dr. Helen Magnus tells them of an alarm of an incoming air attack. When they arrive on the roof, a young woman lands right before them, followed by a young man with the appearance of a stereotypical vampire, both with bat-like wings. Magnus identifies him as Bruno Delacourt, and is visibly unhappy to see him.

Magnus has Bruno and his wife, Sheila Delacourt, who has damaged one of her wings, come with her to the infirmary. She soon figures out that the damage to Sheila's flap was purposely inflicted, but leaves the couple alone for the time being. She then goes to see Henry, who is hiding from the new arrivals in her office. They talk about how they could be lying when suddenly an alarm goes off. Together with Bigfoot, they find Bruno locked behind Henry's hidden security door in front of the armory.

Back in Magnus' office, Bruno explains to her that a shipment of Red List Abnormals is on its way into the city, and that he and Sheila wanted to grab some stunners to free the abnormals.

Bigfoot is doing a medical checkup on Sheila's wings in the infirmary. She tells them that Cecile has asked about him, and asks if he thinks he's too good for a Ferrolump. Henry summons them all to see Magnus, but not before Sheila reveals that Cecile is still keeping a lock of his fur, making him quite uncomfortable.

In Monrovia, Will is driving around on his motorbike when he spots a man who seems to have trouble starting his car. He leans in to help, but is knocked out from behind by a second men. The two then take off with the car and the bike, leaving Will unconscious.

When Will is found by Yusuf, he is badly injured. His retinas are detached, which could result in permanent blindness. After taking Will to a safehouse, Yusuf has to leave him for a while.

Magnus and her team prepare for the rescue mission with Bruno and Sheila, but Magnus is unwilling to give the two any weapons.

Back in Monrovia, Will receives some medication, but it will take some time to get him a doctor. After taking a sedative, he dreams of himself as a boy, standing over his mother's grave a year after she died. His father is also there, but has little time for him because he has a business meeting in Houston.

Meanwhile, the Sanctuary team arrives in a dark alley, but is ambushed by several shooters. After taking them out, they investigate further, and soon find the red list shipment, which seems to have been stolen from Columbia. Bruno retrieves a small package from one of the crates, but is caught by Magnus. It turns out to be a small fortune in diamonds.

Bruno and Sheila explain that they need the diamonds to buy guns, and then sell the guns with a profit to buy a group of orphans out of slavery. Nobody believes their story, and Magnus has them both thrown into lockup for the time being. However, Henry soon discovers that at least the part on the weapons was true: a shipment of anti-abnormal arms prototypes is on the move, and they need Bruno and Sheila to find it.

Meanwhile, Will remembers him and his father fighting on one of his birthdays because his father is losing money playing cards.

Bruno and Sheila go to the see their contact for the weapons deal, but the driver of the van turns out to be dead. Government soldiers arrive, shooting at the couple, but Magnus and Henry take them down with stunners. When the dust has cleared, Bruno and Sheila have gotten away with the suitcases from the van.

While Bigfoot is worrying about the situation in Liberia, Magnus and Henry track down Bruno and Sheila, who are making up more excuses.

In Monrovia, Will wakes up from hearing sounds of violence, but is to weak to get up. He remembers more of his past, the day he discovered that his father was involved in illegal fraud. They had a big fight, and Will severed all ties over it.

Magnus tells Henry to take the weapons, and Bruno and Sheila try to plead with them. Mentioning how their trust has been betrayed at every turn, Magnus leaves and tells them they have no more business together. On their way down the stairs, they further the discuss the situation, and Magnus is not sure everything the couple said was a lie.

Back on the roof, Bruno and Sheila are very upset about not getting the money. Bruno promises to his wife that everything will work out, and they fly off.

Will remembers meeting his father in prison after his indictment, shortly before Will was graduating from Quantico. Will wanted to help him on his case, but Mr. Zimmerman told him to stay out of it.

Will wakes up and is told by Yusuf that he was out for several days. It turns that his eyes are recovering. After hearing that Yusuf's family is safe with his sister, Will asks him for a telephone.

In Noland's hideout in the harbor, Bruno and Sheila have already been captured by his men, and he orders them to kill the two.

Bruno tries to talk Noland into selling him the orphans, but he wants five million dollars. Sheila is outraged, but before things get out of hand, Noland and his men are stunned from behind by Magnus and Henry. They free the couple and the orphan children, who turn out to be of the same species as Bruno and Sheila.

When Will is back in the Sanctuary, his eyes have fully recovered. Bigfoot leads his father into the room, who has a gotten him a birthday present: a baseball signed by Roy Halladay. Mr Zimmerman only says, "look at you", and they embrace. 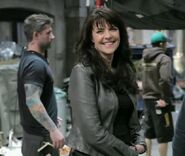 Mr. Zimmerman and Will

Young Will Zimmerman
Add a photo to this gallery

Retrieved from "https://sanctuary.fandom.com/wiki/Homecoming?oldid=22290"
Community content is available under CC-BY-SA unless otherwise noted.