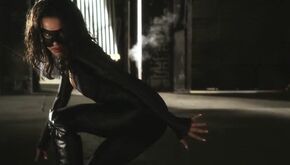 Kate gets taken host to an abnormal and gets superpowers.

"Hero II: Broken Arrow" is the fifth episode of the third season of Sanctuary.

After a biohazard alarm is triggered in the Sanctuary, Kate's body is taken over by an abnormal the team encountered before.

Henry, Helen, and WIll

Will, Henry, Bigfoot, and Helen

Helen and Kate
Add a photo to this gallery

Retrieved from "https://sanctuary.fandom.com/wiki/Hero_II:_Broken_Arrow?oldid=16066"
Community content is available under CC-BY-SA unless otherwise noted.