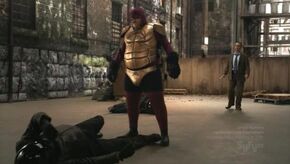 "The Adjuster" comes to the rescue

"Hero" is the fourth episode of the second season of Sanctuary, and the seventeenth episode overall in the series.

A man runs down a street in Old City, followed by two men in black on equally black motorcycles. He manages to evade them several times, but they eventually catch him in a backyard. Suddenly, a strange, heavy-set man in a superhero costume, calling himself "The Adjuster", appears from the sky and knocks the motorcyclists out. After declaring that the streets of Old City are now under his protection, he takes the hunted man and flies away with him. The hunters take off their helmets, and turn out to be Dr. Will Zimmerman and Declan MacRae of the Sanctuary Network.

The Sanctuary team analyzes what has happened; Dr. Helen Magnus has no explanation for the "hero"'s ability to fly.

Next, Will and Magnus are called to a hidden cave that was discovered under a down-town construction site. They find a large egg that has hatched recently, and claw marks on the walls. All the workers who were there when the cave was found are assembled, except for one man named Joe, who went home saying he did not feel well.

Back in the Sanctuary, Magnus analyzes the egg while Will tries his best to find Joe. Meanwhile, Henry Foss shows Kate Freelander how to feed the Abnormals in the Sanctuary. Kate gets a call on her cell phone and leaves in a hurry. Looking for Joe, Will and Declan find cat remains, while Henry finds more footage of The Adjuster, and Magnus tells him to find the man.

In his home, The Adjuster tries to find a good catchphrase. When he hears of a crime on the police channel, he flies to the scene, where Magnus is waiting for him. Realizing he got into a trap, he tries to get away, but Will takes him out with a Sonic Stun Weapon.

After analyzing The Adjuster back in their lab, Magnus and Will realize that he is not an abnormal.

Meanwhile, Kate meets with the young man who called her, who turns out to be her brother, Thad Freelander. He tells her that he owes gambling money to a crime boss named Constantine, and asks for her help.

In the lab, Will talks to The Adjuster, whose true name he has found out to be Walter. He explains that the man he "rescued" from them was an empathic abnormal they wanted to protect. He tries to get Walter to tell him where his powers comes from, but he refuses. At the same time, Magnus finds out that an egg like the one they discovered was found by the U.S. Federal Army in 1892 in Idaho. The creature seems to enter its victim's body before evolving into the next stage of its life cycle, and all eye-witnesses spoke of its high-pitched shriek. Henry taps into Old City's terrorism suppression grid and programs it to alarm them if anything makes a noise louder than 90 decibels.

Will tells Henry Walter's explanation why he can fly, but Henry realizes that Will got played with a number of stories from different comic books. Just then, the Sanctuary alarm is triggered: The Adjuster had overwhelmed Bigfoot and gotten away.

Declan and a Sanctuary intervention team find Joe's mutilated body; something seems to have broken out of him. Moments later, they discover a large insectoid creature, twice a man's size, but it gets away before they can take it out.

Will joins Declan on the scene, and concludes that the abnormal is looking for a place to enter its next stage. Meanwhile, Magnus and Henry discover that Walter's suit is made of billions of small abnormal bugs called Prolatomebia volubilis who form a collective mind and body. They are what gives him his strength and the ability to fly.

Kate meets with Constantine and pays her brother's debt with one of the Stenopelhabbilis tusks she got from Henry for finding Ralphie.[1] However, he explains that he does not want her money: he heard of her involvement with the Sanctuary Network. Since the Cabal's demise, he has need for someone who can supply him with abnormals, and he offers her the job. Kate angrily refuses and leaves.

While Declan and Will continue to look for the insectoid, Magnus finds something in Walter's blood, and goes to warn him. Walter is just waking up at his home; hearing another distress call on the police channel, he jumps off his balcony, but this time, his suit does not work and he falls.

Walter wakes up back in the Sanctuary. Magnus and Will explain that his suit is a parasite feeding on him. They tell him to take it off, but he says he tried that before, but he cannot.

Walter tells them that the insurance company he used to work for took him and his co-workers to a team-building retreat in the mountains. When playing a game of capture-the-flag, he fell into a cave, where a pool of living slime covered him: the suit gave him all he wanted in exchange for feeding on him. In the following time, the team tries all they can to get the suit of Walter, but nothing works.

Kate meets with her brother, gives him some money, and tells him to get out of town.

Magnus has created a toxin that kills the suit's bugs, but she has doubts about it. Walter also does not want to have the creatures killed. They hear from Declan, who has tracked down the insectoid, and leave.

Kate gets a call from Constantine, who has abducted Thad. He tells her to get her a lizard creature from the Sanctuary. She agrees, but tells him that he must take care of the means of transportation.

The Sanctuary team hunts down the insectoid, which has already killed Declan's other men. They discover a huge cocoon, but the creature has already hatched from it and is now even larger than before.

The team tries to take down the insectoid. They are unsuccessful at first, so Walter comes to their rescue. Just when the creature has cornered Will, The Adjuster arrives and battles the creature.

Kate leads Constantine and one of his guards into the main lab, where he is fascinated upon meeting Sally, the mermaid. Kate shows him to what he thinks is the lizard creature's cage but is actually the Sorkel. When he is close enough, she opens the glass door and the abnormal grabs, kills, and devours him. Next, she programs one of the robot arms at the ceiling to lock onto the guard, making him drop his gun. She lets him leave and tells him to spread the word: "Kate Freelander is not for sale."

The insectoid is too much even for Walter, but the rest of the team can eventually stun and secure the creature. Walter is taken back to the Sanctuary, where the suit is leaving his body for good, since he was finally prepared to let it go.

Magnus meets with Kate and inquires what happened in the lab. Kate does not tell her, and expects to be asked to leave, but Magnus tells her that Henry will move her things to more permanent quarters. Kate is surprised and happy, and thanks Magnus.

The team later learns that Walter has written a comic book, using several suggestions from Henry, and has already been nominated for several awards, and sold the movie rights.

Declan, Kate, Bigfoot, Will, and Helen

Henry, Will, Helen, and Declan
Add a photo to this gallery

Retrieved from "https://sanctuary.fandom.com/wiki/Hero?oldid=21785"
Community content is available under CC-BY-SA unless otherwise noted.