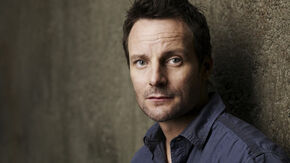 Henry Foss is an abnormal member of Dr. Helen Magnus' team in the Old City Sanctuary. A self-proclaimed geek, Henry is both a weapons designer and a brilliant computer scientist, not only supplying new gear to the team for missions, but regularly maintaining Sanctuary's defenses, and keeping them working just as well.[1]

Henry was found on the moors as a child by Helen Magnus,[2] who took him back with her to the Old City Sanctuary. There, she raised him together with her biological daughter Ashley,[3] while Bigfoot served as a father figure.[4] He has no memory of his biological parents.[5]

Within the Sanctuary, Henry takes care of the Sanctuary’s defenses such as the EM shield, and designs weapons, for example the stunner.[6] He also takes care of household problems that may arise, such as "unclogging plumbing disasters".[7]

He is an Abnormal, specifically a class nine hyper-accelerated protean life form,[8] more specifically a werewolf.[9] For most of his life, only Helen Magnus and Bigfoot are aware of this[10] and does not want anyone else to know.[11] He holds off relationships and is afraid to open up, even to close friends.[12]

He takes medication (a mixture of Diazepam and other drugs)[13] to suppress the transformation from happening, similar to Nikola Tesla’s medication used against the bloodlust brought on by his vampiric nature.[14] For a long time he ignores his werewolf side in the hope that it will just go away, but does eventually change in spite of the medication.[15] After this, he briefly considers surgery (consisting of excising portions of both the pituitary and pineal glands) to rid himself of his abnormal nature, because he fears he will hurt those around him. He ultimately decides against the surgery when he manages to track Robbie Meyers and realizes his power’s potential if he learns to control it.[16]

Over time, he shows growth in the level of control he possesses over his Abnormal side, as predicted by Bigfoot,[17] as well as in his of acceptance of it. In "Revelations, Part I" Henry is captured by the Cabal, who plan to turn him into a werewolf permanently. He tells his captors that his Abnormality is not a condition and that he is not ashamed of who he is. He manages to harness his power and escape. By season 3 he is able to change back and forth at will and describes it as “pretty awesome”. He tries to convince others of his kind that they should not have to hide and that their werewolf side is part of who they are. By this point he has stopped taking the medication as he has come to believe that "it's no answer."[18]

Henry is close to Rachel and her husband Gerald, Abnormal researchers with whom he has worked together for a number of years. He describes Gerald as being like a brother to him, and believed he was helping Rachel and her marriage by being a friend, "someone she could count on". However, they grew closer than intended and Rachel had fallen in love with Henry, only marrying Gerald because he was the one who asked. Gerald had picked up on his wife's infatuation and attempted to kill Henry by drugging the Pleskidara Jack. When this plan backfired and Rachel was the one to nearly die instead, he attacked Henry with a knife to force him to transform. He intended for the werewolf Henry to kill him so he wouldn't have to live without his wife, while Henry would have to live with having killed one of his closest friends. But when Rachel crashes Gerald is distracted and captured by the Big Guy. Without the threat of the knife Henry manages to quell his transformation. Rachel recovers, but Henry tells her they can't be together.[19]

For a long time Henry believed he was the only one of his kind, "the beginning and ending of [his] line." While there sometimes are other werewolf sightings, they never turn out as such. When investigating another such sighting in the English town Oldham together with Will, they come across a private psychiatric clinic. Henry is admitted as a patient in an attempt to investigate and discovers that all other patients are werewolves as well. He succeeds in convincing the inmates that they can live amongst society and don’t have to fear the transformation. He begins a romantic relationship with one of the heads of the institute, Erika.[20]

Henry and Erika keep a long-distance relationship for a while,[21] until Erika visits Old City. Henry proposes to her, while at the same time Erika asks him to come live with her in London. They realise neither is willing to give up their life for one another and go their separate ways.[22] Some time later, Erika visits the Old City Sanctuary again to tell Henry she is pregnant with his child. Due to complications, Magnus slows down the gestation period (from around 10 months to possible 22 months) to ensure the safety of both Erika and the fetus, meaning that Henry will be a father sometime within in the next year & a half. Helen tells him he will have some serious decisions to make come that time, possibly leaving the Sanctuary.[23] When Henry creates a video log for his future child while testing the FOSSS vest in "The Depths", he announces the names that he & Erika have picked out. They decided upon naming their child after their late HAP friend Alistair if it was a boy and Alice if the child was a girl. Henry also announces that their child will be raised in England and is excited by the future prospects that his kid will actually have a cricket bat and an accent.

Henry is absent in the episode "Next Tuesday" because he is surfing in Tasmania; Bigfoot is with him. In "Sleepers", they are missing because they are attending the San Diego Comic-Con. He speaks some sign language[24] and is a four time claw crane state champion.[25]

In the alternate timeline created by the Guardian, Henry created weapons for the government to use against the infected until it fell.[26] He's among the many who died; from the postmortem photo found by Helen Magnus it appears he was shot in the head after he became infected.[27]

In the original Sanctuary webisodes, Henry's character is quite different from the one in the TV series. His origin is explained as being a descendant of Gregory Magnus's original weaponsmith back in London. When asked by Will whether he is an Abnormal or not, Henry answers he is "a normal, boring homo sapien".[28] He is responsible for weapons and tech support, among others things, and refers to himself as being "just an employee".[29]

Helen Magnus
Magnus found Henry on the moors as a child and took him with her to the Old City Sanctuary, where she raised him together with her biological daughter Ashley. Helen became a mother figure to Henry and she in turn feels very maternal towards him, though they also share a genuine kinship and a friendship that "goes beyond the boundaries of mother and son".[30]

Bigfoot
Henry grew up with Bigfoot in the Sanctuary, and the two are very close. Their relationship can be characterized as father and son.[31][32]

Erika Myers
Henry became involved with Erika shortly after meeting her and her clan, the first other werewolves he ever knew.[33] They had a long distance relationship for some time[34], and when she came to visit him in Old City, he decided to propose to her, against Will's advice. It turned out Erika was unwilling to move to Old City, just as he did not want to go to London.[35] Several months later, she visited the Sanctuary again to tell Henry she is pregnant.[36]

Retrieved from "https://sanctuary.fandom.com/wiki/Henry_Foss?oldid=14751"
Community content is available under CC-BY-SA unless otherwise noted.