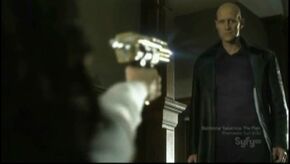 "Haunted" is the eleventh episode of the second season of Sanctuary, and the twenty-fourth episode overall in the series.

The team rescues the occupants of a sinking ship off the coast of South Africa and teleport them to the Sanctuary. However, Magnus suspects Druitt of murdering one of the passengers during the rescue.

The Old City Sanctuary takes in a number of badly injured Empaths from the Mumbai Sanctuary who John Druitt teleports out of their burning ship one by one. After he has brought the last survivor, John behaves oddly. Dr. Helen Magnus is obviously concerned about him, as is one of the empaths. John just stares back at the man, and smiles menacingly.

Magnus and Bigfoot operate on one of the empaths while Dr. Will Zimmerman asks Henry Foss to help them with the search and rescue logs. One of the female empaths confronts Druitt, telling him that he will never find a home as long as his dark side controls him. He reacts by taking out a small knife and cutting her throat.

While Will is asked for help by one of the other survivors, Henry and Kate Freelander find the dead female empath in a locker.

After examining the body, Magnus confronts Druitt, who admits to her that his dark side, "Jack the Ripper", has indeed returned. He tries to flee, but the EM Shield is up, and Magnus is able to kill him with a special weapon designed by Henry.

In the medical facilities, Magnus and Kate are able to revive Druitt, but also cause a major energy surge in the Sanctuary's power grid. After Kate leaves, Druitt regains consciousness and is brought to a holding cell.

Will tries to move one of the prisoners, who tries to warn him that "something terrible" is inside the building. Meanwhile, Magnus is trapped inside Druitt's cell when all doors in the Sanctuary suddenly close; the automatic lockdown of the facility has been triggered.

Kate and Bigfoot are trapped in the main elevator. Bigfoot reveals that the Sanctuary is still equipped with a traditional hardwired intercom system from when it was originally built.

Magnus is told by Druitt that he will soon answer for his deeds, while Will's and Henry's patient in the infirmary is running out of oxygen and screams of some "Darkness" being in the building. Kate and Bigfoot are able to establish contact with Will and Magnus, who advises Henry how to treat the Empath.

After purposely causing another power surge, the team begins to realize that something has jumped from Druitt into the Sanctuary's systems.

The team tries to find a way to get the energy creature out of their system: they take out the security cameras it uses to monitor them, and proceed from different locations.

Druitt explains that the darkness inside him that turned him into a murdering psychopath seems gone for good. Magnus concludes that he must have picked up the energy creature during one of his first teleports after his powers first manifested. It is a being that feeds off chaos and suffering, and will eventually destroy all it encounters.

The energy creature tries to unleash chemical weapons in the Sanctuary, reactivates the heating system which Will is using to escape the infirmary, and repowers the elevator Bigfoot and Kate are in. Henry however is able to outfox it and save his friends' lives.

Will is able to cut main power, causing the elevator to crash into the ground; Bigfoot and Kate survive by hanging onto the ceiling.

Once power is restored, the rest of the team rushes to the main lab, where the creature prepares a biogenic weapon. Druitt declares his eternal love for Magnus, and teleports into the lab, letting the creature take control of him once again.

The team arrives to help him, but he is agitated and disoriented, and decides to teleport away to an unknown location.

Henry, Musa, and Will

John Druitt
Add a photo to this gallery

Retrieved from "https://sanctuary.fandom.com/wiki/Haunted?oldid=21792"
Community content is available under CC-BY-SA unless otherwise noted.