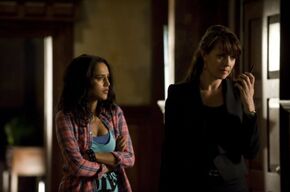 Kate and Magnus are in trouble.

"Hangover" is the twelfth episode of the third season of Sanctuary.

Returning home from an overnight trip, Magnus is stunned to find the Sanctuary in a complete and utter shambles - only hours before a scheduled inspection by the United Nations.

Helen Magnus returns to the Sanctuary to find the hall barricaded and the security systems offline. Drawing her gun, she begins to search the facility, and finds most rooms in complete chaos. A stun weapon lies on the floor, and most of the furniture is destroyed. Someone even booby trapped a door with a gargoyle statue. Eventually, Magnus finds Henry Foss, who has taken a blow to the head. She asks him what happened, but he only says that he cannot remember, and loses consciousness.

Henry wakes up on a sofa, with Magnus watching over him and giving him medication. She tells him that it is Thursday; he has no memory since Tuesday, when Magnus left for a conference to brief the other house heads on Hollow Earth. She also ordered the team to get the Sanctuary in perfect shape for an upcoming UN inspection. Henry then proceeded to enter a new Abnormal's data into the system; it is a mollox, a small, furry, horned humanoid from Sri Lanka. When he released the creature, which he named "Skippy", from its crate to feed it, it attacked him. He ran away and managed to stun it with a sonic stun weapon. After that, he has no more memory.

Back in the present, Magnus finds it odd that a mollox would attack a human, as it is not aggressive, not even a carnivore. She soon finds it docile and afraid in a corner, while Henry is surprised to find himself locked out of the Sanctuary's systems. While he hacks his own computer, Magnus alerts Declan MacRae. Henry discovers that the person tampering with the computers seems to have been Will; they watch a video of him, being pursued through a hallway and shot in the back with a stun gun by Henry.

Henry is shocked about what he did; he goes to his lab to recover the remaining footage while Magnus continues her search for the rest of the team. She soon finds Kate who has been bound and gagged. After being freed, Kate explains that she too has suffered memory loss. Her last memory is that she came to see Will when they heard Henry cry for help over the radio. They arrived at the lab, finding it abandoned and the mollox's crate empty. Kate found Bigfoot, and together they saw Henry walking through a corridor. Kate went to see him, and he started firing at her. She lured him to a corner and hit him over the head with a fire extinguisher.

Magnus and Kate discuss what to do next when they realize they have lost radio contact with Henry again. They proceed to the lab, where they are shocked to find Will angrily attacking Henry and threatening to kill him.

The women manage to separate Will and Henry, and Magnus angrily demands an explanation. Will says that both Henry and Kate should be locked up. His last memory is that he and Kate started looking for Henry, and that he went to the residential area, where Henry started firing at him. He later woke up and went looking for the others together with Bigfoot. When Will went to the main laboratory, the automatic lasers started firing randomly, and an Abnormal kraken's cage opened. Bigfoot arrived just in time to keep the creature from eating Will, and explained that he was attacked by the garbage compactor. Will realized what is going on.

When they confronted Henry in his lab, he attacked them, and Bigfoot knocked him out before he could transform. They then went looking for Kate, who attacked Will with her gun when he found her. Bigfoot once again came to the rescue, knocking out Kate as well.

Back in the present, the team realizes that someone – or something – has been messing with their heads, and apologize to each other. Henry then finds an e-mail from Lilian Lee, the UN security inspector, saying that she will arrive earlier: she is possibly already in the Sanctuary. At that point, Henry hears a bell ringing in the south corridor. They follow the sound to an elevator, finding Bigfoot hanging from the ceiling.

Bigfoot is angry at Will, and adds his own memory to the puzzle: after he knocked out Kate, she woke up and ran away, while Will, who had just touched her for a moment, became angry and paranoid as well, and left. After discovering that Henry has escaped, Bigfoot pumped through the Sanctuary air filtering system, collected Kate and locked her up. He then went for Will, and checked his pulse.

Henry has recovered more security footage, which shows the team acting paranoid and systematically attacking each other over and over again. It also shows Bigfoot being shot by Dr. Lee, the UN inspector.

Watching the video of Bigfoot finding Will again, Magnus discovers that a small creature, a pinepex, jumps from one to the other. Its defense mechanism is to release a pheromone into the bloodstream of stronger creatures, compelling them to protect it; it has come to the Sanctuary with the mollox.

The team sees footage of Dr. Lee heading for the catacombs below the Sanctuary. Magnus injects them all with a sex-inhibitive pheromone to make them temporarily immune to the effects of the pinepex. In the catacombs, they are able to stun Lee and get a hold of the creature. Magnus explains that, like them, the UN inspector will not remember what happened, so they just have to let her sleep and use the time to clean up the place.

Dr. Lee wakes up in Magnus' office, with Magnus talking to her. When she asks what happened and why she cannot remember anything, Magnus explains that she hit her head getting out of her taxi, and has had a number of blackouts since then. Will and Kate arrive with tea and security data, both doing their best to appear extremely helpful. Lee, however, is suspicious; she can remember certain events from her arrival. They decide to tell her the truth, and Magnus tells her that the Sanctuary is not a zoo, and that they are very good at doing what they do. They also show her the footage of herself attacking Bigfoot, leaving her quite embarrassed. Lee decides to let the whole event go unreported, and joins the team for a tour of the facility.

Will notes that this does not seem the first time Magnus had to deal with officials in such a way.

Bigfoot, Will, and Henry

Will,, Kate, Helen, and Bigfoot

Will, Helen, Kate, Henry, and Bigfoot
Add a photo to this gallery

Retrieved from "https://sanctuary.fandom.com/wiki/Hangover?oldid=16095"
Community content is available under CC-BY-SA unless otherwise noted.