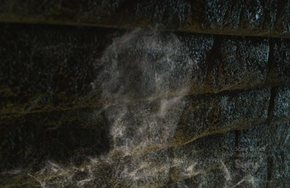 The Guardian is a powerful Abnormal, a creature of energy and thought that exists outside our conception of time. It was charged with protecting a dark secret of the Maya civilization, and carries out this duty even as the Maya are long gone.

Long ago the Mayan kings, who were a group of Abnormals with the same or a very similar longevity abnormality as that of Helen Magnus, attempted to find a way to escape the "curse" of their long lives and live a normal life span. To this end they created an elixir that would do just that. The elixir was successful, but had the unforeseen side effect of transforming the majority of the population into ravenous "zombie"-like Abnormal beasts.

In the end, the Mayan civilization was decimated by the virus and the few survivors sealed the elixir away, as they were unable to destroy it. They entrusted the protection of the formula and the world at large to a non-corporeal Abnormal whose state of existence (outside the boundaries of time) made it immune to the virus and also meant it could guard the vial forever.

"The End of the World"

Some time after the death of her daughter[1], Dr. Helen Magnus arrived at the temple seeking to take the formula, as she was tired of outliving those she cared about. Taking the formula worked, but Helen inadvertently made herself patient zero for the cannibal zombie virus. While she was not affected due to her unique longevity (an abnormality similar to that of the Mayan kings), the majority of human and abnormal population of the world was mutated into ravenous cannibalistic creatures with an insect-like stinger (similar in appearance to Alexei's tentacle) in their mouths. Helen worked night and day to find a cure. She never realized that she herself was the source of the plague. She ultimately died, trying to evacuate a bombing site.

Three years later, "Present Day" Helen found herself in the ravaged future with no memory of how she arrived. She encountered a grimmer, hardened Will who was all that remained of her friends. All of which had died fighting against the plagued humans. When the remains of the Sanctuary was besieged by the infected who had come to claim an infected girl that Magnus was trying to cure, Helen realized the horrible truth from the video logs she had made when the plague had first emerged: the Mayan formula had carried the plague. By taking it she had doomed the world. Horrified, she stood her ground, waiting to accept her fate for her actions.

Instead of dying, she was surrounded by a white light and found herself back in the Mayan temple, at the point where she was just about to take the vial. The Guardian finally showed itself to Helen and it was revealed that the creature had shown her a parallel future, one in which she had taken the elixir. Understanding this, Helen realized the creature was guarding the formula. While the creature refused to allow Helen to take the formula from the temple to destroy it, it assured her that it was safe there, and then permitted her to leave.[2]

Retrieved from "https://sanctuary.fandom.com/wiki/Guardian?oldid=21562"
Community content is available under CC-BY-SA unless otherwise noted.