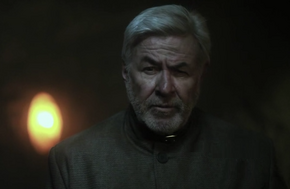 Gregory Magnus is a renowned scientist, an expert on Abnormals, and the father of Helen Magnus.

Gregory was born in Devonshire, England, in 1829. He became a renowned physician as well as a researcher of the Abnormal world. By the late 19th century he was considered one of the top scientists of his day. He married a woman named Patricia Heathering, who gave birth to a daughter, Helen, in 1850. Helen followed in his footsteps as a doctor, and after she was denied any opportunities to actually practice, was introduced to the world of the Abnormals by him.

He later disappeared during an expedition to Mecca; Helen believed him to be dead, but he had in fact found a way into Hollow Earth and lived with the people of the underground city of Praxis for many years. Eventually, he tried to return to the surface in order to make contact with Helen, but was kidnapped and enslaved by the Cabal.

In 2009, he reappeared under the name Charles L. Denton and without any memory of his former life. After Helen learns that he was now himself an Abnormal and that a parasite called "Scarab" is controlling him, and removes it, he regains his original memories, and decides to set out on his own, not wanting to endanger his daughter and the Sanctuary Network.[1]

In 2010, he was seen in a vision by Will Zimmerman after communicating with Kali. He gave Will two numbers and a symbol which led Helen Magnus to unlock a holographic map of a city, therefore starting a new mission for the Sanctuary team.[3]

Magnus and her team later encountered Gregory alive and well in Hollow Earth, where he had slowly earned the trust of the people of Praxis, including their leader, Ranna Seneschal. His contacting Helen and giving her the clues to find Hollow Earth was a transgression that was forgiven only after the team helped save the life of the superspecies abnormal Kanaan and defeat Adam Worth. Gregory decided to stay in Praxis for the time being in order to learn more about the secrets of Hollow Earth.[4]

Gregory Magnus was presumably killed when Praxis was destroyed by Adam Worth in an attempt to power up the Kellorem Device, a machine he was building to travel back in time to save his daughter's life. However, Helen Magnus and John Druitt only recovered his broken walking stick, not his body.[5]

There is some confusion as to how Gregory Magnus has lived as long as he has. He does not have his daughter's gift of longevity; yet he continues to outlive her supernaturally advanced age. Sam Egan, one of the only two writers of the first season, addressed this in a commentary track on Episode 1x10 - "Warriors", in which Gregory Magnus was reintroduced into the story. Egan stated that he purposefully neglected to provide an explanation for Gregory's apparent lack of aging, but wanted to hint to the audience that he was in fact cryogenically frozen by the Cabal.[6] However, this was later retconned in Season 3 Episode 3x11 - "Pax Romana" when it was revealed to Helen by Ranna Seneschal that Gregory had spent 65 (Praxian) years as a well-respected citizen in the city of Praxis in Hollow Earth. Making it so that Gregory achieved his longevity thanks to the advanced medical science there.

[Pure Speculation / Not Proven Alternative Theory]: Otherwise, Gregory could have found Praxis in 1909, undergone a longevity treatment, lived there for 64 normal years until 1973, then left and got stuck in ice for 35+ years until sometime in 2008 when he was found by the Cabal, then returned to live in Praxis for the past year throughout the entirety of 2009 until the beginning of 2010, and now has been on the run for up for the last unknown amount of several weeks / months since Episode 3x02 - "Firewall", according to Worth in Episode 3x07 - "Breach" saying that Helen has knowingly had the map for 'weeks' since he sent Tabors to visit the Sanctuary.

Note: Gregory being at least 79-80 years old at the time he left for Mecca is interesting as in Episode 1x10 - "Warriors" his 'Charlie' persona is said to be turning 61 in upcoming March 2009. That is an 18-19 year physical age difference. Actor Jim Byrnes himself was born September 22nd, 1948, making him 60 at the end of 2008 when the episode aired in mid-December.

While not explicitly stated, the overall consensus by the audience was that Patricia had died while Helen was very young, leaving Gregory to raise her as a single parent. Gregory being a widower and sole parent easily explains how he is clearly very beloved by Helen and has been such a heavy and prominent influence in her life.

As seen in Season 3 in Episode 3x02 - "Firewall", Gregory is referenced as usually being 'cryptic' in passing along information to Helen and to others. However, throughout the rest of the show he is seen to present behavior completely opposite to this judgement.

The only time Gregory is actually known to have been 'cryptic' in his behavior was in how he relayed his message to Will in the form of a brand on his arm while accessing the Avatar Chamber as seen in Will's memory during Episode 3x02 - "Firewall"; something Helen called her father out on at the end of Episode 3x11 - "Pax Romana", asking for him to be "a bit less cryptic" the next time he contacts her.

In Episode 3x11 - "Pax Romana", Helen states that her father never gave her a gift without significance. Gregory's message to her through Will of a pair of numbers along with a symbol indicate two gifts she received for her 26th and 34th birthdays, respectively. The gifts are a Praxian "paper weight" holographic device for her 26th, and a folded paper map of Praxis found in a rare first edition book of Michelangelo's architectural designs. This indicates that Gregory knew of Praxis at some point before August 27th, 1876, long before his disappearance to Mecca/Praxis sometime in or after the year 1909, after returning as the sole survivor from his trip to Bolivia.[8] This has the audience question Gregory's cryptic behavior as to:

The gifts he gave her always held significance, implying that she always knew the real reason as to why she received it; Helen knew her father's mindset and behaviors very well so it's highly unlikely she would misinterpret his intention(s) behind why he gave her something. It does not make much sense as to why Gregory would give her a gift to let her believe it was for one reason, only for the actual reason to have been intentionally kept secret from her for over a century until there was a dire reason for it to be known.
Note: At the time Gregory gave her the two gifts, it was before either Gregory and Helen had knowledge of or had each personally gained or activated the ability of longevity, meaning that the secret behind these gifts could have easily died out from sheer length of time alone; outside of considering potential death to either person from mortal injury or illness at any point.

Being that Gregory was found to have lived in Praxis for 65 Praxian years as of early 2010, it calls into question whether or not Gregory had left on his trip in the early 1900's to actually travel to Mecca or if it was just a cover all along to find Praxis instead. Another scenario could be that Gregory indeed went to Mecca and then continued on to Praxis from there, to not return until supposedly 2008 in the form of a human ice cube.

Since Gregory did ultimately find Praxis, it means that he would have had to figure out how to access the map, understand Cuneiform (which was only just successfully deciphered in 1857[9], 19 years prior to Helen receiving the gift), and then correctly operated the map interface to locate a keystone. That keystone would then need to be retrieved and properly inserted into the map interface to find its corresponding gateway. Afterwards, the final step requires that the keystone would then need to be taken to the gateway itself and inserted into the lock mechanism to open the passageway that eventually leads into Hollow Earth.

Being that Gregory gave Helen the map device for her birthday in 1876, Gregory would had to of had a keystone already by then, holding on to it and remembering the gateway location for over 35+ years before even traveling to the location at some point after the start of the year 1909.

The whole situation overall doesn't make much sense as to:

Note: An easy explanation for all of the issues in this section stem from the fact that the writers/creators retconned Gregory's whereabouts for the last century. They brought the character back and wanted to incorporate him into the new Hollow Earth arc, haphazardly trying to have Gregory leave cool "breadcrumbs" (gifts) for Helen to find and follow. It's highly doubtful that at the end of Episode 1x10 - "Warriors" that writers had even thought up the Season 3 idea of Hollow Earth yet as it was revealed that the writing process for a season typically doesn't start until funding had been secured and the show was set to begin filming the first episode of the season within a month or less.[11][12]

Retrieved from "https://sanctuary.fandom.com/wiki/Gregory_Magnus?oldid=19660"
Community content is available under CC-BY-SA unless otherwise noted.