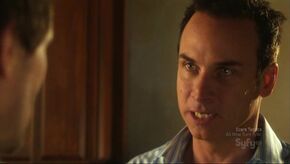 Mr. Gerald is a research scientist of the Sanctuary Network. He is Rachel's husband and an old friend of Henry Foss.

Gerald and his wife Rachel of them care for and study an Abnormal, a Pleskidara named Jack at a local research facility in Old City. While he studies the creature's biochemistry, Rachel studies it's behavior.

Gerald and Rachel's marriage came under strain as Rachel spent more and more time with Jack and Henry Foss, eventually entering into an emotional affair with Henry. Jealousy got the better of Gerald and he attempted to murder Henry by drugging and releasing Jack prior to a planned feeding by Henry. His plan came undone when Rachel instead came to feed Jack and was infected by Jack's deadly spores.

Gerald confronted Henry in the Old City Sanctuary over the affair and stabbed Henry. Believing that Rachel's death was inevitable, Gerald wished to die and tried to force Henry to change into a Werewolf to save his own life and kill him, as well as punish Henry who would have to live with the guilt of the deaths of both Rachel and himself. He was stopped by Helen and Bigfoot after been distracted by Rachel suffering a seizure.[2]

Retrieved from "https://sanctuary.fandom.com/wiki/Gerald?oldid=21553"
Community content is available under CC-BY-SA unless otherwise noted.