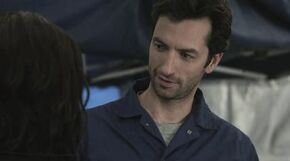 Garris is one of the many Herusans from Hollow Earth who came to the surface in order to look for a new life.

A jewelry maker by craft, he befriended Kate Freelander in the provisional camp set up for him and the other newcomers. He gave her a necklace made of a stone from Hollow Earth, and later had a fight with another Herusan when the latter insulted Kate. He then told Kate that they needed to stop being near each other, most likely because of his people's prejudice against humans.[1]

Garris took charge of the Abnormals when Thelo was killed in an uprising, and tried his best to stop any further violence. Kate and Bigfoot eventually discovered that he and Fallon were working together, and had faked Fallon's death to incite violence in the refugee camp. He turned on Fallon, however, when he realized she had planned the destruction of Praxis and the violence on the surface all along. As the new acting leader of the Abnormal tribes, he decided to lead them back into Hollow Earth and build a new society. Kate decided to join him, with the support of Helen Magnus.[2]

Some time after their return to Hollow Earth, he gave Kate a promise band, the Herusan equivalent of an engagement ring.[3]

Retrieved from "https://sanctuary.fandom.com/wiki/Garris?oldid=15821"
Community content is available under CC-BY-SA unless otherwise noted.