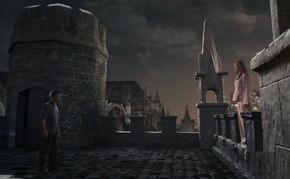 Will and Abby sing their feelings.

"Fugue" is the eighth episode of the fourth season of Sanctuary, and the fifty-fourth episode overall in the series.

This is the first and only 'Musical'-styled episode.

A mysterious abnormal attacks, and Magnus and Will discover there is only one way to communicate with this unusual enemy, through music.

The team has cornered a violent humanoid abnormal with a naturally armored body in the Sanctuary; the creature throws Dr. Will Zimmerman through a wall, and resists the others' attempts to stun it. Dr. Helen Magnus gets an upgraded stun weapon from the armory and is able to take the abnormal down. As Will drops a blanket over it, it returns to its original form -- Abby Corrigan.

Abby is taken to a secure isolation room, and Will mentions that this is the third transformation she has been through in 24 hours. Meanwhile, Henry Foss and Abby's partner at the FBI, Agent Gavin Crealy, search the site of the first incident.

Magnus suggests to Will that he has to find a way to keep Abby close to the real world and the people who care about her. He sits watch at his girlfriend's bed for two days, but there are no changes. When Declan MacRae arrives, he puts on some music, causing Abby to instantly wake up and demand to know what is going on—in a singing voice. Will and Declan try to talk to her, but she can only communicate by singing.

Magnus discovers that Abby's brain is undergoing changes that cause her to be able to understand the harmonic frequencies of singing, but not those of normal speech. They are able to establish a dialogue with by singing to her, and ask her what happened. She cannot remember what happened to her, and is getting weaker.

Henry and Gavin have made no progress. Henry decides to talk to the local Red List dealers, but just at that moment Gavin finds something on his scanner. They identify a thermal residue that leads them to a slimy cocoon.

Back in the Sanctuary, Magnus identifies the cocoon as similar to that of a Galvernic Blood Tic, which often pairs up with other organisms. She deduces that Abby was purposely infected by Hollow Earth insurgents to see if the Sanctuary team would be able to counter the effects.

In the infirmary, Will tries to sing in order to be able to communicate with Abby. When Gavin arrives, Will angrily accuses him of letting his partner down, and tells him there is no way to make this right.

Some time later, Abby wakes up and identifies Will. However, when he calls her Abby, she gets up and reveals to be the parasite who has taken control of her. Singing to him, she quickly overwhelms him and tries to seduce him, but Magnus and Declan arrive just in time to sedate her.

Henry checks up on Will and convinces him to take a break. He later sings a folk song to Abby for comfort.

Magnus arrives in the main lab, where Declan has set up a video conference with a number of House Heads and Richard Feliz. They start to complain about a number of difficulties related to the global networks change in relations to the United Nations. To Magnus' shock, everyone suddenly starts to sing.

The team continues to work on Abby's case, but apparently to no effect. Will wakes up from his sleep, and discovers that Abby has disappeared. He finds her at the Sanctuary's rooftop, ready to jump. He finally overcomes his shyness and sings to her in order to make her return to safety. In the song, he confesses to her that he loves her and that he thinks she is the love of his life. She answers that she loves him too, and jumps off the wall.

A shocked Will watches as Abby falls. However, halfway down, she once again transforms into the mysterious armored abnormal, and lands safely. Before she can get away, Magnus stuns her once more.

Magnus scans Abby's brain again, discovering that her brain is already undergoing permanent changes. Will is unwilling to give her up, and so is Magnus. She goes to the library to investigate further, and has a vision of her father singing to her. She remembers a theory of his about the origin of abnormal species, which suggests that abnormals are created when a being's DNA violently tries to differ itself from the rest of the gene pool, becoming something new and unique.

Magnus figures out one possible solution to Abby's "disease"; they could implant a Giant Salamander parasite larva into her body to attract the mutant DNA to an even more malleable host. However, that creature would evolve rapidly and eventually fight its ways out of Abby's body, possibly killing her.

Will is afraid of the consequences, but Magnus is adamant in her decision to use the procedure. Both leave, not noticing Gavin, who overheard the whole conversation.

Henry and Declan take Will to a holding cell to keep him from interfering. However, Gavin stuns Henry some time later and frees Will.

Magnus and Declan are in the process of performing the operation; the advanced salamander larva breaks through her abdomen, wounding Abby seriously.

While Magnus and Declan try their best to revive Abby, Will has to watch helplessly, and sings a soft "just stay". Eventually, Abby's pulse comes back.

Some time later, Will comes to see Abby in one of the guest rooms where she is recovering. She remembers what he told her on the roof, and considers their relationship "disaster-proof" now. Will counters that he can handle anything, as long as he doesn't have to sing.

Finally, Will and Magnus have to talk. She asks him to be truthful, and he admits to being angry about the way she went over his head. She explains that she chose him as her protegé exactly because he would not compromise about the things he believed in, and that she is very proud of him.

Abby, Helen, and Will

Henry, Will, and Declan

Henry, Will, and Declan

Abby, Helen, and Will

Abby, Will, and Declan
Add a photo to this gallery

Retrieved from "https://sanctuary.fandom.com/wiki/Fugue?oldid=21825"
Community content is available under CC-BY-SA unless otherwise noted.