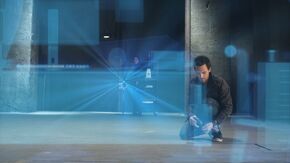 "Fragments" is the sixth episode of the second season of Sanctuary, and the nineteenth episode overall in the series.

One of the Sanctuary's research scientists is viciously attacked by a seemingly docile Abnormal. While Magnus tries to save the life of the scientist, Henry investigates the origin of the creature's uncharacteristic behavior.

An attractive blonde woman, Sanctuary scientist Rachel, walks down a parking lot and talks to Henry Foss over her cell phone. The two joke about her romantic plans with her husband, until Rachel enters her lab and is attacked by someone called "Jack". Henry helplessly listens while she is seriously hurt.

Henry, Will, and Kate enter the lab fully armed, and find Rachel badly wounded. While the other two follow "Jack", Henry attends to Rachel, who briefly wakes up but then fades away. Magnus tells him they have to get her into surgery, and they both realize that if the attacker has laid spores, there is little hope for the young woman.

Meanwhile, Kate and Will search the surrounding area for "Jack", who turns out to be a reptiloid abnormal. They are able to stun him, and Will explains that he has been working with the Sanctuary Network for years, and never once tried to harm anyone.

Bigfoot brings Rachel to the Sanctuary's infirmary, where Magnus finds that she is indeed infected with Jack's spores, which will soon consume her body and kill her. They move her into quarantine and begin to remove the spores, but there seem to be too many.

Henry cleans the lab after making a holographic image of the room. He can barely make it out in time. Will and Kate move Jack to a secure cell, while Henry recreates the lab in the Sanctuary to find out what happened.

Rachel's husband, a Sanctuary biochemist named Gerald, arrives just when Magnus and Bigfoot realize that the infestation spreads too fast to remove it in time. Rachel's life seems doomed.

Magnus puts Rachel into stasis to slow down the infestation. She then asks Gerald for his research, which may help to find a cure.

Meanwhile, Will and Kate try to reconstruct the attack in a cardboard double of Rachel's lab they created with the help of the holographic data. They conclude that Jack must have knelt in the back of the room when Rachel approached him. At the same time, Henry visits Jack, who is awake again and tries to use sign language to communicate. Henry is angry with him and leaves after a few minutes.

While Rachel gets worse, Bigfoot collects samples of ripe spores from Jack's body. Henry tries to talk to Gerald, who takes the prospect of losing Rachel very hard. Gerald later goes to see Jack and fires at his cage with a submachine gun.

Henry stops Gerald from killing Jack, and takes him away. They talk, and Gerald tells Henry to please find someone else to guard him. Jack survives almost unharmed. Afterwards, Magnus shows Will her progress in finding a way to cure Rachel's infestation. Will wants to try and communicate with Jack.

Kate and Will discover that an injection needle was lying on the floor in Rachel's lab, and conclude that she wanted to inject him with something. Henry reviews footage of his, Gerald's, and Rachel's experiments with Jack when Kate arrives and asks him to enhance the picture of the medicine on the floor.

Will visits Jack and tries to communicate with him by sign language. He interprets the abnormal's gestures as a request for food, which seems to frustrate it. Back in his lab, Henry identifies the medicine as betamethasone, a common immunosuppressive. Upon hearing this, Magnus concludes that Jack was exposed to the Siberian fungus that makes his species aggressive, and that Rachel suspected exactly that and tried to counter the effects.

Magnus has a talk with Gerald, who confesses that he was upset because his wife spent more time with the research on Jack than with him. Magnus tells him that if it turns out Jack was not under the influence of the fungus, she will lock him away forever.

Some time later, Rachel has been stabilized much to Henry's and Gerald's surprise. The treatment Magnus has devised with the help of Gerald's research seems to be successful in killing the spores, but Rachel suddenly flatlines: the toxins in her bloodstream threaten to kill her.

Magnus and Bigfoot try to revive her, but there seems little chance. Bigfoot puts something from his medicine bundle into her mouth which stabilizes her for now. Gerald then asks them to leave him alone with his wife.

Magnus waits outside when Kate and Will arrive. They show her the results of Jack's blood test, which show that the abnormal was indeed under the influence of the Siberian fungus. Will suspects that the "eat" gesture Jack continues to make does not mean that he wants to eat, but rather that he tries to tell them that there was something in his food.

Gerald tells his unconscious wife that he planned a romantic trip for them when Henry arrives. He angrily accuses Henry of always intruding into their marriage, saying that Henry is everything Rachel wants him to be. Henry does not know what to say, until he realizes that Gerald was the one who put the fungus into Jack's food: he wanted to make the creature kill Henry, and Rachel was only attacked because she took over Henry's feeding duty. Gerald then grabs a knife and stabs Henry, whose eyes turn yellow, indicating that his werewolf transformation has been triggered.

Gerald attacks Henry again, but Magnus and Bigfoot arrive in time to confront him. Just then, Rachel has another attack, which distracts Gerald long enough for Bigfoot to overwhelm him and take him away.

Some time later, Rachel has stabilized and talks to Will about her failed marriage in the Sanctuary's garden. Henry arrives and they have the first serious talk about their feelings; Rachel admits that she is in love with him, and that she only married Gerald because Henry never made his move. However, she realizes that Henry does not return her feelings the way she thought he would.

Magnus and Henry talk about the problems Henry caused in Rachel's and Gerald's marriage. He thanks Magnus for saving her, and leaves.

Kate Freelander: Well, hey, I'm no scientist, but you teach a deadly abnormal how to talk, and all you'll get is a deadly talking abnormal.

Will, Henry, and Kate

Henry and Helen
Add a photo to this gallery

Retrieved from "https://sanctuary.fandom.com/wiki/Fragments?oldid=19065"
Community content is available under CC-BY-SA unless otherwise noted.