Start a Wiki
For King and Country 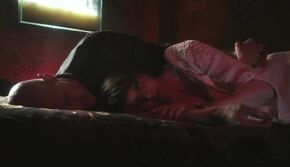 "For King and Country" is the eighth episode of the third season of Sanctuary, and the thirty-fourth episode overall in the series.

After capturing a dangerous enemy with ties to her past, Magnus is forced to recount a time she would rather forget. A time when the young Five were almost destroyed and a horrible secret was discovered.

Following his capture, the man who ambushed Dr. Helen Magnus in an abandoned warehouse is rushed into the Old City Sanctuary's infirmary. Tesla removes his breathing mask to see who he is, and is astonished to see him alive. When Henry asks if he knows him, Tesla introduces the man as "Jekyll and Hyde".

A worried Will asks Magnus if he can help, but she tells him to go help Henry. She then explains to him how The Five began their work at Oxford. In a flashback, the five young scientists are conducting an experiment when Adam Worth, one of their classmates, enters and asks them to let him participate. They refuse, and John Druitt tells him in no uncertain terms to leave. While Magnus operates on Adam, Tesla continues the story: The Five discussed adding Adam to the group, but decided against it. Magnus was the one to give him the bad news, which made him angry.

In the present, Magnus cannot find a reason for Adam's organ failure, until they discover that he suffers from some kind of radiation sickness. Meanwhile, Henry and Tesla work on the machine he used. When Adam wakes up, they have a talk with the "evil" side of his personality, who informs him that John Druitt has the answers. Magnus says that they do not know if Druitt is even still alive, but Tesla informs her that he does, in fact, know John's whereabouts.

Helen is furious with Nikola, who explains that Druitt came to him for help, believing that his work on electromagnetism might help him control the energy elemental that shared his body. Druitt made Tesla promise that he would not tell Magnus. However, Magnus now insists on being told.

Meanwhile, Will has another talk with Adam and tries to reach his "good" personality. Adams just taunts him, and tells him that they need him to find the underground city.

Tesla is frustrated by the complexity of the unknown technology. With Henry's help, he is able to determine that it is made of organic nanite matter.

Magnus has traveled to Phnom Penh, the capital of Cambodia, to find John Druitt. She starts asking for him in the city's slums, and is approached by a teenage girl who wants one hundred dollars for telling her the address.

In the infirmary, Adam tells Will that he should be honored for having met Kali and the Avatar Council and having been allowed to live. Will asks about the Council, but Adam answers with a poem by Edgar Allen Poe, and accuses Magnus of murdering his daughter. He recounts how he went to see the Five and ask for help for Imogene Worth, his child, who is dying of leukemia. Magnus and Dr. James Watson tell him that nothing can be done, and leave him in anger of his daughter's fate.

Back in the present, Magnus is ambushed by the teenage girl and her fellow bandits.

Magnus tells the robbers to relax, and throws her remaining money into the air, using the confusion to grab the girl's gun and take control of the situation. The teenager tells her that a bald man paid them to kill anyone looking for him. Magnus deducts that they really do know where he is.

"Of course they know," a voice answers from a door in the back, and John Druitt steps into the room.

He tells the bandits that they are all fired, and Magnus makes them leave without their weapons. John almost immediately collapses, and Magnus realizes that he has taken several drugs. She tells him that Adam Worth is alive, which he says is impossible.

In another flashback, Magnus talks to with the British Prime Minister, who reveals that his Majesty's government knows all about the Five. He also reveals that Adam Worth has become powerful and wealthy, and that he plans to use a deadly poison to attack London. The Five agree to help.

Back in the present, Will discovers that Adam will die from radiation poisoning, and that he has cross-referenced the blood sample with one from someone else. The result leaves him, Tesla, and Henry with worried faces.

In Cambodia, Magnus has put John into bed, and now lies down next to him, holding his arm. She remembers meeting with him on a bridge in London, where she told him that she could never forgive him for what he did (referring to his time as Jack the Ripper). He answered that he looked forward to continuing their "dance", and teleported away. Watson arrived next, telling her that Griffin and Tesla found a lead to Adam.

Magnus takes John back to the Sanctuary, where Tesla and Will show her a blood sample. She is worried, saying that Adam will die in a matter of weeks. However, they tell her that the blood is not Adam's.

Will and Magnus discuss what to do next, with Magnus refusing to give in to despair. Will explains that he blames her and Watson for his daughters death. Magnus recounts that they did in fact try to save Imogene, but to no effect. Will also asks about Adam's claim that she murdered him. Another flashback shows the Prime Minister informing the Five that King Edward VII personally ordered the assassination of Adam Worth. They refuse, but the Prime Minister tells them that if they take out Adam, his Majesty's government will pardon Druitt and Griffin, and give full support to Magnus' and Watson's efforts to extend the Sanctuary Network.

The Five decide to find Adam, and manage to stop his plan to pump cyanide through London's gas lines. They then went after him, tracking him to a mining area. Magnus held him at gunpoint on a cliff, and shot him in the shoulder to stop him from summoning his dark side. He then jumped into the abyss.

Will is distraught that, as he puts it, the whole Sanctuary Network was build on the death of a psychologically challenged man. Magnus angrily rebuffs him and leaves, coughing blood. She then goes to see John, who tells her that he saved Adam from drowning in the river he fell into. Adam told him about a network of safe houses he had created, and asked him to let him go. Believing him to be as good as dead, Druitt did just that, and used the safe houses to avoid capture for decades.

Will confronts Adam, who tells him that the cure for Helen and himself is in Hollow Earth.

Adam recounted to Helen how, after John let him go, he drifted with the river into an underground tunnel, eventually being discovered and rescued by the inhabitants of a city in Hollow Earth. With their advanced technology, they healed him and gave him an abnormally long life. He then tells her that she has to take him with her to find an entry point to Hollow Earth.

Later, the team discusses their options, with Magnus violently opposing the notion of giving Adam the map they discovered earlier. However, Tesla arrived with a copy of the Sanctuary Charter, which clearly states that if the House Head becomes physically or psychologically compromised, the second-in-command takes over.

Druitt asks where he is going with this. Tesla explains that the person to decide what their course of action will be is not Helen, but Will.

Retrieved from "https://sanctuary.fandom.com/wiki/For_King_and_Country?oldid=21196"
Community content is available under CC-BY-SA unless otherwise noted.