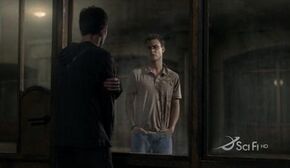 Will Zimmerman talks to a folding man held in the Sanctuary

"Folding Man" is the fourth episode of the first season of Sanctuary.

An investigation into a string of bizarre robberies leads Magnus and Will to a crime ring of thieves who seem to be able to slip between the cracks of the law... literally.

A pawn shop is being held up on a windy night. When police sirens wail in the distance, one of the two thieves shoots the terrified shopkeeper and they flee. As the cops close in on one of the thieves, he slips through a delivery door and slides down a coal chute into the basement, where he compresses himself and escapes thru a 10-inch wide pipe.

At the Sanctuary, Will arrives late to find Team Magnus in the library watching security camera footage of the robbery.

Will, Helen and Ashley then visit the crime scene basement and realize that the pipe, far too small for a man, is the only way out. They send a small robotic camera into the pipe and find a fingerprint deep inside.

Back at the Sanctuary's lab, Dr. Magnus postulates that they might be dealing with a 'folding man' - a sort of super contortionist.

Moving into the library, she and Ashley show Will examples of this 'urban myth' in various books - from Shinto monks to Elastic Ed (Ashley's favorite). Will mentions a similar case he once worked on and is surprised when Dr. Magnus is aware of it. How'd you know about the Austin case, he asks? "Are you serious?", quips Ashley, "She knows when you switched from boxers to briefs, man". In both cases the thieves were after gold, killed their victims and escaped thru impossibly small openings.

Jake Polanski, one of Will's old co-workers at the FBI, lends him the files from that case. DNA leads Team Magnus to Oliver Braithwaite, a homeless drifter who they assume might be the father of one of the thieves.

Mr. Braithwaite agrees to talk to Dr. Magnus because he has heard good things about the Sanctuary, a place "where people like us are treated like human beings". Braithwaite tells them about Nomad, a 'criminal genius' who takes the best of the 'folding' offspring, turns them against their parents and addicts them to a drug he makes. Braithwaite, like any parent, just wants his boy back.

Next, high on a rusted girder, Ashley meets with Mr. Jones, a crime boss who runs the city's drug trade. Mr. Jones tells Ashley where to find Malcolm Dawkins, a fugitive folder, in exchange for her promise to get a lead on Nomad. After their meeting, Mr. Jones drops off the girder and glides/flies away. Using Jones' information, Will and Ashley chase Malcolm into a trap and take him back to the Sanctuary where Dr. Magnus sedates and examines him.

They discover that Malcolm is addicted to TPG, a gold-based pain killer - which eases the pain of 'folding'. When he awakens, Malcolm reveals that he is terrified of Nomad (who will execute him for not killing the pawnbroker like he was told to) - and yet he defends the man who addicted him and believes that Nomad will set 'his kind' free. Ashley and Bigfoot go to tell Mr. Jones what they have learned, only to discover that he has fallen to his death because someone 'clipped his wings'.

Will continues to question Malcolm as Henry searches online for a clue to the TPG's whereabouts. Malcolm admits that he was in the Austin bank vault when Nomad killed the Bank manager (who was begging for his life). But he says that they had to stick together for safety. He tells Will that Aaron Braithwaite wanted to stand up to Nomad, but that Nomad was too strong and kept them all weak with 'glitter' (TPG). He tells him of a place that Aaron said they could go to if they escaped, but when Magnus and company get there they find Aaron dead, stuffed into an old washing machine. Mr. Braithwaite is heartbroken when he is told of his son's fate.

While Will continues to work with Malcolm, who appears to be going through an agonizing withdrawal, Helen and Ashley track what they think is the TPG to what they hope is the lab. Will convinces Malcolm to go with him to Nomad's hideout, but it's a trap. Malcolm was the monster all along, Malcolm is Nomad. He left a false trail for Dr. Magnus to follow. The real TPG is being shipped in from Austin, Texas. When Will reveals that Nomad killed Aaron one of Nomad's men (Carver) begins to question him. Just then Dr. Magnus and Ashley arrive. Nomad shoots and Carver returns fire. They both fall dead. The rest of the folding men are taken back to the Sanctuary to go thru detox.

Will returns the files to his friend at the agency, but he lies, telling his friend that he couldn't solve the case. How could he explain his strange new world?

Will, Helen, and Ashley

Delivery Man and Ashley
Add a photo to this gallery

Retrieved from "https://sanctuary.fandom.com/wiki/Folding_Man?oldid=16212"
Community content is available under CC-BY-SA unless otherwise noted.