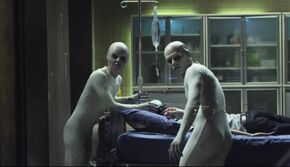 The visitors are caught probing Will.

"Firewall" is the second episode of the third season of Sanctuary, and the twenty-eighth episode overall in the series.

Following his near death experience, unwanted visitors attempt to find what is locked in Will's memories, and Magnus' position as head of the Sanctuary Network is questioned.

While the Sanctuary team tracks down an abnormal (a Giant Salamander), Dr. Will Zimmerman falls unconscious and almost lets the creature get away. The team eventually captures the creature, although Declan MacRae is injured. Magnus coldly tells Will that "this was totally avoidable".

Back in the Old City Sanctuary's infirmary, Magnus is treating Declan's arm, while he tells her about rumors he heard from other Sanctuaries. Henry Foss arrives and asks for Will to be removed from the mission list. Magnus defends Will, but eventually agrees to suspend him for the time being. Declan continues to tell her that she might lose her position as head of the Sanctuary Network. However, Magnus refuses to play politics, and wants to find out what caused the counter-waves that saved the Pakistani coast from Big Bertha's tidal wave.[1] Kate Freelander asks Magnus for money to buy information on a powerful abnormal from a former Cabal scientist.

Magnus then talks to Will, who suffers greatly from the experience of dying and returning from the "other side", and the fact that he cannot remember what happened. Magnus tells him to take his time, and informs him that he is off the mission list. She also gives him some medication to take.

After talking to Henry and Bigfoot, Will has a vision of his time with Kali and the other "deities". Both he and Magnus sense something strange going on, and Bigfoot and Henry realize that their advanced animal senses are not working. When he goes to sleep, Will again recalls part of his death experience, and also has visions of strange, pale humanoids with bald heads and sharp teeth attacking him.

In the infirmary, Will is beginning to think that he might be going insane, and that he desperately wants to remember what happened to him while he was dead. Magnus then talks to Kate, who tells her about a 2005 Cabal operation in Indonesia, where four hundred Cabal agents hunted for an unidentified abnormal, when suddenly the volcano Mount Merapi erupted, killing all the hunters and turning the entire area into a disaster zone. Magnus tells her to continue searching for clues to this unknown abnormal. Meanwhile, Will is put into an induced sleep by Bigfoot.

At a video conference with eight other House Heads, the aftermath of the Big Bertha crisis is being discussed. Magnus explains that the giant abnormal spider is now safe and secure, when Terrance Wexford interrupts her, wanting to discuss Magnus' future with Sanctuary. Declan tells Wexford that in his opinion, Wexford has more to answer for than she does. Magnus passionately reminds everyone of their mission to protect, not harm abnormals, as her father intended. Pili, house head of the Cairo Sanctuary, speaks for the council, informing Magnus that she has been confirmed by unanimous vote as head of the global network, and that Wexford has been removed from his position as head of the New York Sanctuary.

Realizing that the secret vote was Declan's work, Magnus looks at him and exclaims, "Cheeky bastard!" MacRae only answers that he guesses his work is done.

In the infirmary, Will remembers more of the events during his death while Bigfoot watches over him. However, Bigfoot soon realizes that something is wrong. The pale beings from Will's vision appear and knock him out. In his lab, Henry sees the creatures through a video feed and alarms the others. They arrive just in time to see the creatures putting a strange device on the back of Will's head.

The team tries to catch the intruders, but they overwhelm Henry using their cloaking abilities and get away. While security measures are put in place, Magnus examines Will and finds two holes in the back of his head. She deducts that the device the intruders used has the ability to extract memories.

Kate and Henry search for the intruders; Henry's sense of smell cannot detect them, so he modifies some chromatographic scanner which should allow them to track the creatures. It takes them a while, but by using Will as bait, they are eventually able to catch them.

The intruders are strapped and put into isolation cells. The team realizes that they want Will's memories from his death experience, and decide to try and use the brain probing device. Henry has trouble activating it, but with a little help from Kate, he manages to make it work.

When the creatures awaken and find themselves compromised, they cause their bodies to self-combust. When Magnus arrives, only ashes are left of them.

The team eventually uses the mind probe on Will. He recalls being in the temple in the "spirit realm", and seeing Kali fall when her physical form was harmed. Impressed with his will to sacrifice himself, the other "deities" grant his wish to save the Pakistani coast from destruction. At this moment, one of the hooded figures holding Will steps forward, and is revealed to be Gregory Magnus. He says "for Helen", and grabs Will's forearm, burning the numbers 26 and 34 as well as a strange symbol into his wrist.

Will awakes, and tells a shocked Magnus that he just saw her father.

Will shows Magnus the symbol and the numbers he saw in the retrieved memory. They deduce that the other "deities" must be other avatars for powerful abnormals.

Next, Magnus sparked by the two numbers, collects gifts she received from her father on her 26th and 34th birthday: a crystal paper weight and a book about Da Vinci's inventions, respectively. She states her father always had a reason behind the gifts he gave her. When she puts the strange symbol-engraved paper weight on a page of the book that features the same mysterious symbol, the paper-weight/device suddenly illuminates and a living holographic model city appears projected all around the team, filling the entire room, complete with futuristic skyscrapers, flying 'steampunkish-like' zeppelins and moving trains. Amazed, Magnus states that if the city the model is based on actually exists, then they will have to find it.

Retrieved from "https://sanctuary.fandom.com/wiki/Firewall?oldid=21796"
Community content is available under CC-BY-SA unless otherwise noted.