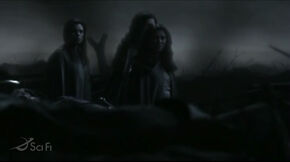 It is a re-shot version of the Web Series main story
in "Webisode 5" through "Webisode 8"
It introduces the mysterious faction
known as the "Cabal".

Dr. Helen Magnus, her daughter Ashley Magnus, and the newest member to the Sanctuary, Dr. Will Zimmerman, travel to a Northern Scottish isle to discover three women in an ancient crypt and bring them back to the Sanctuary for refuge and study.

In a foggy, moonlit Scottish burial ground, Dr. Helen Magnus is attempting to keep a frigid Dr. Will Zimmerman and a young, impatient Ashley Magnus quiet while they observe an ancient crypt guarded by strange, skeletal Keepers of the Dead. As they advance they are suddenly attacked by more of the Keepers than they bargained for. Magnus and her daughter lay down a barrage of fire from their handguns and the unarmed Will is sent ahead to take refuge in the crypt. Inside, he finds three sarcophagi around a circular stone in the floor. When he stands on the engraved stone, the sarcophagi lids swing open and a green liquid seeps from the sarcophagi into the engraved crevices on the floor. Magnus then joins Will in the crypt, leaving Ashley to fend off the last of the Keepers outside. "This might be my first crypt," says Will, checking the pulse of one of the three beautiful, unconscious entombed women, "but aren't they supposed to hold dead people?"

Back at the Old City Sanctuary, Ashley is preparing for a mission to hunt down a humanoid chameleon while her mother is worried about her going alone. After Ashley reassures her mother that she can handle the job, Magnus tends to the three comatose crypt-women. She begins to examine one of the Keepers and asks Will if he would assist. Will is disgusted by the Keeper's appearance and flees to his office.

One of the crypt women awakens and screams. Will rushes to comfort her and is surprised that she can speak English. She identifies herself as Danu and her two sisters as Tatha and Caird. Danu is puzzled by electric lights and can not remember anything except being taken from her village where everyone was dying from a plague of inhuman creatures. Back in her lab, Magnus is performing an autopsy on one of the creatures. Will refuses to accept that Danu could possibly be from 800 AD, when the plague last infected Scotland. By now, all three sisters are awake and beginning to radiate some sort of energy. Meanwhile, back at the Scottish crypt, a modern team of mercenaries is checking the recent battleground, angry that someone has already emptied the crypts.

While the storm is gathering, Ashley is creeping around a subterranean cavern looking for her chameleon menace. It finds her soon enough and attacks. Despite the creature's near invisibility, she eventually vanquishes it in close range combat it with supposedly the new gear Henry wanted her to test (a device akin to a high-powered taser) after failing multiple times to shoot it with her shotgun from afar.

At the same time, The Morrígan are increasingly troubled that they can't remember what happened, and even more troubled that Will insists that what they do remember is false, a trick of their minds caused by fear and stress. "There is no logical or physical way", he tells them, "that your memories can be real". Magnus is not so sure. She has analyzed the green liquid from the coffins and thinks that it could have kept the women alive. Will, meanwhile, tries to use hypnosis on Danu. She recollects being captured by the creatures and, earlier, walking with her sisters in a dark, cold field - among the dead whose souls had been extinguished. Magnus believes that the rings each of the women wore indicate that they may have belonged to a "society of some sort" and that someone may therefore have noticed that they're missing. That someone, the mercenaries, are already en route to the Old City Sanctuary - along with a large group of angry Keepers.

Magnus calls Ashley (perched high on a rooftop ledge) and urges her to check on the rings, which she has traced back to a secret cult called Cabalis Nocturnum - collectors of ancient 'beings of power'. She tells Ashley to check with Squid and then to hurry home because she has a bad feeling about all of this. Danu is also troubled as she stares out Will's window, captivated by her view of the city. "When I sleep at night", she tells him, "all I see are dead faces … haunting me, asking me why. You want us to remember who we are. Well, perhaps there is a good reason that we forgot". Magnus again attempts to convince Will that his overly rational view may be missing something. She explains about The Morrígan - three medieval 'witches' "whose sole purpose was to destroy men" - by draining their souls of life. She also explains about the Cabalis Nocturnum - "another reason I'm not sleeping", she says. Suddenly, The Morrígan awaken from their memory dreams and remember who they are, and that they were the reason for the dead men in that ancient field. The Sanctuary begins shaking violently and Will is startled to find the sisters holding hands, floating in the air, rotating.

Things begin exploding and the violence builds until Magnus shoots The Morrígan with an energy gun. They fall to the floor, stunned, and the shaking stops. However, the energy they generated has fried a number of systems, including their perimeter security systems. The Sanctuary is now vulnerable. Magnus wants to lock the women away, but Will protests and tries to convince Danu that she and her sisters now have a choice - they don't have to kill for the Cabal.

Ashley meets Squid on a deserted, half-destroyed bridge. He tells her that the Cabal is tied into everything - medical and scientific research companies, military think tanks, bio-tech firms : "These guys are one James Bond film away from global domination". And, he tells her, they are coming to take back what was taken from them. But the Keepers are already scaling the undefended walls of the Sanctuary. As Ashley phones her mom, they begin their attack.

Magnus locks down the fortress as best she can and begins fighting the Keepers, telling Will to help The Morrígan get out thru an escape tunnel. Danu is surprised to learn that Will would set them free rather than have them live in a crypt and do the Cabal's bidding.

When Ashley arrives, the gate is locked so she swims into an inside pool and pops up shooting. As mother and daughter fight off the Keepers, Henry Foss is captured by the mercenaries. Will tries to help with the fighting but doesn't even know how to release the gun's safety. The armed mercs, with Henry in tow, arrive and surround Team Magnus. However, before a last gun-battle ensues, The Morrígan return. They kill or knock out most of the mercs and ask/demand that the officer in charge "leave these people unharmed". "They did not take us out of greed", says Danu, "but out of charity". The Cabal Team Leader is not happy to hear demands from the sisters but he agrees to leave since his 'property' agrees to return with him. Magnus and Will cannot convince The Morrígan to stay - but they have been changed by their brief taste of freedom. It is clear that they will come up against the Cabal again. "This is far from over" warns Magnus.

Magnus, Will, and The Morrígan

The Morrígan and Will

Squid and Ashley on Dead Bridge

Squid and Ashley on Dead Bridge

Tatha and Caird
Add a photo to this gallery

Retrieved from "https://sanctuary.fandom.com/wiki/Fata_Morgana?oldid=22212"
Community content is available under CC-BY-SA unless otherwise noted.