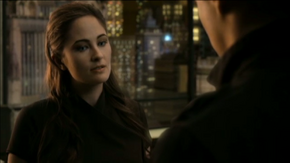 Fallon was a Herusan inhabitant of Praxis, and the chief council to Ranna Seneschal.

In a desperate attempt to save Praxis from disaster, she revived Adam Worth to help. Her plan was to secretly use his expertise with a power source containing antimatter to raise a shield which would save the city from rising magma levels. However, Adam alleged her true motive was to gain control of the city's defense grid and allow her abnormal tribe and its allies in the senate to forcibly take control of the city from the humans. Upon getting his hand on the weapon she helped him steal, he stunned her and left her behind.[1]

Fallon and her fellow rebels were exiled from Praxis and hid away in the outlands of Hollow Earth. When the power began to fail and rumors of a devastating attack on Praxis surfaced, they decided to march to the surface and look for a better life there. Fallon did her best to open a dialogue with humanity. However, before a compromise could be reached, she was found stabbed to death by an unknown attacker in her tent. Thelo and his followers used this incident to start a violent uprising against the Lotus Defense Corps troops guarding their camp.[2]

However, Kate Freelander and Bigfoot later discovered that Fallon had in fact faked her own death, and that she was the person behind the whole plan, including the destruction of Praxis and the uprising. Once her closest ally, Garris, turned on her, she was taken prisoner to be judged by a tribunal of her peers.[3]

Retrieved from "https://sanctuary.fandom.com/wiki/Fallon?oldid=14088"
Community content is available under CC-BY-SA unless otherwise noted.