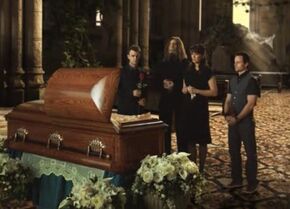 "Eulogy" is the third episode of the second season of Sanctuary, and the sixteenth episode overall in the series.

While Helen and John each deal with Ashley's fate the rest of the Team is forced to deal with an influx of Abnormals who have arrived from Sanctuaries that were destroyed in the Cabal attacks.

Dr. Helen Magnus imagines John Druitt bringing their lost daughter Ashley back to the Sanctuary, but soon realizes she is daydreaming. Meanwhile, Dr. Will Zimmerman is busy organizing the rebuilding of the Sanctuaries that were attacked by the Cabal, as well as the relocation of the residents of the lost Tokyo Sanctuary. However, he soon realizes that he miscalculated the number of trucks needed for the transport, as there are hundreds of abnormals on the ship from Japan.

Will, Henry Foss, and Two Faced Guy struggle to find space for the Abnormal new-arrivals. Kate Freelander prepares to leave, but Will visits her and tells her she can stay if she wants. Helen continues to experience flashbacks when Will arrives to talk to her about loss and mourning, but Helen explains that she sees no reason to mourn since she believes that there is a very real chance that her daughter is still alive.

Kate and Henry quarrel over Kate's materialist attitude, while Helen explains that the EM Shield was unstable when Ashley teleported out and was presumably killed. However, she says she needs Will as an "emotional compass", since her acting only on her feelings almost destroyed the Sanctuary Network once before.

In the middle of the following night, Kate tries to steal two dead specimens of Stenopelhabbilis, a rare and precious race of Abnormals, from the Sanctuary's hold. However, she discovers that the female was pregnant and the young survived. She tries to take it, but it bites her in the hand and escapes.

On the next day, Bigfoot and Henry learn from Kate that the Stenopelhabbilis baby got away. Ark-Fong Li, the visiting head of the Beijing Sanctuary, soon finds it eating a hamburger, and is also bitten when trying to catch it.

Will and Helen search for the signs of Ashley's survival, while a seemingly emotionless John Druitt arrives at the Sanctuary to inform Magnus about his and Nikola Tesla's attempts to penetrate the Cabal's operations. Magnus realizes that what he does is track down and kill the senior members of the organization one by one. He was yet unable to capture Dana Whitcomb, but swears that she will answer for what she did. He also urges Helen to plan for Ashley's funeral, but Helen makes it clear that she will decide when the time has come. She has a vision of driving through the desert and meeting an old woman.

Li, Henry, and Bigfoot discuss how to find the missing baby when Kate adds that it seemed to like hamburgers.

Helen tells Will that she now believes that Ashley "bounced back" from the EM Shield and re-materialized somewhere within the Sanctuary. Will tries to explain to her that she may be wrong and Ashley may actually be dead.

The guys are still hunting for the baby. Li discovers it eating another hamburger, but it escapes again. They chase it to the lower levels where Bigfoot almost gets it, but it hides in the ventilation systems and leaves the facility. Kate joins the guys, stating, "Well, you clearly don't need my help..."

Henry and Kate in Old City, looking for the baby. Kate offers Henry her skills in exchange for the valuable tusks of the dead parents, and he offers her one pair.

Helen and Will discuss Ashley and her mother's feelings, until the computers detect something. In a Lower Level under the Sanctuary, they find the skeleton of a person who obviously teleported into a wall. They analyze it and realize it is not Ashley but one of the other Super Abnormals.

Henry and Kate follow the tracks of the baby – half eaten hamburgers – through the city and into the sewers.

Helen experiences more visions, and begins to believe that Ashley is trapped in the EM Shield's buffer in the form of energy. Will begins to doubt her judgment, but agrees to continue looking for signs of Ashley.

In the sewers, Kate is still looking for the baby, only to discover that it has grown into a full-size Stenopelhabbilis, staring down at her from the ceiling.

The Stenopelhabbilis attacks Kate, disarming her. Henry saves her before it can hurt her, but they get trapped in what Henry soon discovers to be the creatures nest. The creature seems to attack again, but only licks Kate's face; she was the first person it met after being born, thus it believes her to be its mother.

Helen remembers returning a sacred artifact to a Native American tribe in 1957, and receiving a piece of silver jewelry as a gift. Upon waking up, Will shows her the results of the EM Shield scan. They are negative, meaning that Ashley is truly gone. Magnus tells Will to inform everyone that the memorial service will be held the following day.

The team has returned the Stenopelhabbilis, whom Kate chose to name Ralphie, to the Sanctuary. Bigfoot likes the name, and Henry admits that Kate did well. Bigfoot is upset when Henry gives her her payment in the pair of tusks, but she returns them to him and decides to stay around.

Helen and Druitt talk about Ashley, and it turns out that Druitt has not truly come to terms with his daughter's death. He doesn't join the rest of the team in the small, quiet memorial service they are holding in the ruins of the Sanctuary cathedral. Everyone leaves something connected to Ashley in the empty coffin.

Finally, while a tearful Helen begins to cope with her beloved daughter's death, putting the silver jewelry into the coffin, Dana Whitcomb is drinking coffee in a street café in Paris. John Druitt is watching her from behind a newspaper, and follows her when she leaves.

Helen has one last vision of Ashley, who tells her that she must let go and continue her life. Helen tells her she can't, to which Ashley replies that she will never truly leave her side.

Kate and Henry
Add a photo to this gallery

Retrieved from "https://sanctuary.fandom.com/wiki/Eulogy?oldid=21784"
Community content is available under CC-BY-SA unless otherwise noted.