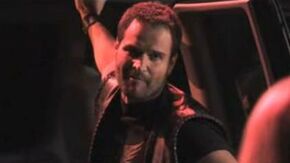 In early-2008, Ashley met with him in a warehouse on the Eastside of Old City to buy some new weaponry; he wanted to convince her to work together more closely when they were suddenly attacked by John Druitt, who quickly incapacitated Ernie by hitting his chest with a morning star. After Druitt left with Ashley, Ernie recovered and informed Ashley's mother.[1]

A few days later, he provided incomplete information to Helen and Ashley, failing to notify them of the Keepers of the Dead (or just the sheer amount of them) protecting the crypt on the island in Scotland.[2]

Years later in early/mid-2011, Ernie delivered a Lepidoptera larva to the Sanctuary team. However, due to his use of a refrigerator instead of a proper cryochamber, the warmer temperature allowed the creature to undergo its final molt faster than expected, causing it to emerge as a fledgling adult prematurely which created quite a bit of trouble for the Sanctuary team who were initially on their way to Alfredo's for a double date. In the end, Ernie was willing to help them -- for the right price.[3]

Retrieved from "https://sanctuary.fandom.com/wiki/Ernie_Watts?oldid=21537"
Community content is available under CC-BY-SA unless otherwise noted.