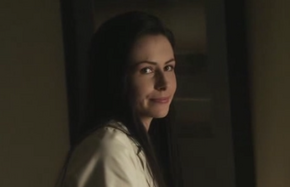 Erika Myers is a member of an English lycan clan.

She and her aunt, Lillian, served as chief scientists of the Oldham Psychiatric Institute, and oversaw the drugging of the other lycans in the facility.

In 2010, Henry Foss convinced her that werewolves could live with their transformative powers by embracing their true nature. When Lillian drugged him to make him lose control over himself, Erika transformed and engaged him in a physical confrontation until the drugs wore off.

After the Sanctuary Network had taken control of Oldham, Erika showed romantic interest in Henry.[1]

The two had a long distance relationship for a while, until Erika came to visit Henry in Old City. He wanted to take her to Alfredo's for dinner, but they had to deliver a dormant abnormal, a lepidoptera, first. Will and Abby Corrigan joined them on this mission. Once the creature was safe, Erika wanted to ask Henry to come with her to Britain, while he wanted to propose marriage and live with her in Old City. They realized that neither of them was willing to give up their life and career for the other, and sort of broke up.[2]

Shortly after the uprising of the Hollow Earth abnormals, Erika returned to Old City to inform Henry that she was pregnant. The pregnancy hormones did, however, cause trouble with her emotions and the transformative abilities, making her agitated and somewhat dangerous. Eventually, Magnus figured out a way to slow down the pregnancy (from about 10 1/2 months to possibly 22) to ensure the safety of the child.[3] This causes Erika's new due date to be sometime within the next year & a half.[4] It is revealed by Henry some time later on that he & Erika have both decided to name their future child either "Alistair" if a boy or "Alice" if a girl in honor of their late friend Alistair. Henry also reveals the couple's plan for their child to be raised in England.[5]

Erika was very close to her aunt, but eventually realized that her way of dealing with existence as a werewolf was wrong.

Erika and Henry fell in love shortly after they first met. Just as Erika's aunt was taken away to the UK Sanctuary, they kissed for the first time. After having a long distance relationship for a time, Erika tried to convince Henry to come with her to London. At the same time, he asked for her to stay and marry him. They ended up parting ways and Erika was left alone for sometime, until she came back to let Henry know she was pregnant.

Retrieved from "https://sanctuary.fandom.com/wiki/Erika_Myers?oldid=21536"
Community content is available under CC-BY-SA unless otherwise noted.