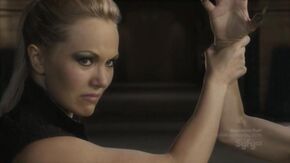 Written By
Damian Kindler
Directed By
Martin Wood
Chronological Information
Preceded By
"End of Nights, Part I"
Followed By
"Eulogy"

"End of Nights, Part II" is the second episode of the second season of Sanctuary, and the fifteenth episode overall in the series.

It is the second part of the Two-Part Season 2 Premiere.

Dr. Helen Magnus goes head to head with the Cabal and must make the ultimate choice: save her daughter, or risk the survival of the entire Sanctuary Network.

Immediately after their fight with the Super Abnormal Ashley, Dr. Magnus returns to the Old City Sanctuary in anger. She interrogates Kate Freelander again, telling her she wants to talk to her contact at the Cabal right now.

Dana Whitcomb gets a call from Dr. Magnus, who wants her daughter back. She tells her that she would happily return Ashley in exchange for the Sanctuary Network. Having to choose between her daughter and her work, Dr. Magnus angrily smashes her phone to the wall.

In Dr. Magnus' study, the team discusses what to do next. Dr. Magnus orders Nikola Tesla and Henry Foss to devise a weapon to neutralize Ashley's new powers without killing her. Meanwhile, the Network has to be secured against the Super Abnormals. John Druitt disagrees, but Dr. Magnus has made up her mind.

Tesla and Henry start working, but Henry realizes Tesla has little hope for success. They plan a localized radiation burst, but it is a difficult process. However, Henry is called by Kate, who needs to go to the restroom. On the way, she meets Bigfoot, who is still suffering from the Lazarus Virus.

Meanwhile the Cabal starts the first mission of their new soldiers: an attack on the Tokyo Sanctuary. Ashley and the others kill the house head, Dr. Hiromara, and overwhelm the facility in twenty minutes. By the time Dr. Magnus tries to launch a counterattack, the Tokyo facility is already burning down.

A video conference with Dr. Magnus and the house heads of the other Sanctuaries is held. Medusa, one of the Network's Abnormal agents, explains that the Tokyo Sanctuary's EM Shield was disabled after the initial breach and before the complete destruction of the place, the Cabal was able to steal all the data of the Sanctuary. Dr. Magnus orders an immediate evacuation of all their residents to prevent their death in a possible next attack, declaring that the Sanctuary Network is now officially at war with the Cabal.

In the meantime, Tesla and Henry keep working on the weapon, but without making any progress. They try their radiation solution on a Nubbin named 'Damien' injected with Tesla's blood, yet the result is less than hopeful.

Will pays Kate a visit and asks her to help them prepare for the next attack. She explains that the Cabal will go after the house heads, weakening the global network, before they come after Dr. Magnus herself. Will suspects she knows more, but she tells him she only came because the Old City Sanctuary is likely to hold up the longest.

Later, the Beijing, New Delhi, and Moscow Sanctuaries are hit. After the attack on Moscow, Dr. Magnus, Druitt, Tesla, and Will move to the UK Sanctuary, which is believed to be the next target of the Cabal. The team meets Declan MacRae, who took over as acting House Head for the UK after the death of Dr. James Watson. Will finds out that Clara Griffin, who has now full control over her cloaking ability, refused to evacuate in order to help them in the fight. She immediately takes him aside and persuades him to spend the hours until the attack with bodily pleasures.

In the following hours Tesla tries to complete his weapon, while Dr. Magnus and MacRae recalibrate the EM Shield. Finally, four Super Abnormal soldiers teleport in front of the Sanctuary and proceed inside.

The UK Sanctuary's alarm is triggered when the four enter. A security team that includes a Troll tries to stop them, but the super soldiers easily overwhelm the humans and Ashley kills the troll by snapping its neck. Whitcomb orders them to proceed to the facility's databanks.

In the library, Ashley and two others face off with John Druitt, who uses his extraordinary sword fighting skills, but is still overwhelmed by Ashley. During the duel, he stabs her in the chest, and the pain seems to temporarily bring back her normal self. However, after mere seconds, she recovers and comes after him again. He gets away, trying to take them to the main lab, but they decide to split up.

Ashley faces Tesla, who traps her in a powerful Tesla coil for a time, while Clara manages to save Will from the super-soldiers. She stays behind fully cloaked, but one of the soldiers still seems to notice her.

After all attempts to stop them fail, the soldiers get to the main lab, where Dr. Magnus uses the new weapon to stop them, but with little result. They are forced to leave them blocked in the lab and release a Fire Elemental. It starts burning them, and even their superior cell regeneration levels are too low to compensate, and because the EM Shield is still up they are forced to retire. The London Sanctuary is saved, but heavily damaged – and the team soon discovers that Clara has been killed. Druitt inquires what to do now, to which Dr. Magnus responds: "We defend our home."

Back in Old City, Henry visits Bigfoot, while Will mourns Clara Griffin. Dr. Magnus lets Kate Freelander go, she hesitates and offers her assistance, but Dr. Magnus refuses and states that she wants her gone. Dr. Magnus and Henry prepare the Old City Sanctuary's defenses, and Henry tells her that many Abnormal residents want to stay and fight. She refuses to have more of them hurt or killed, and visits Bigfoot to talk to him. She explains that she understands his feelings, but still leaves the cure for the virus next to his bed.

Dr. Magnus next meets with Tesla and orders him to alter the weapon using a sample of Ashley's original blood: she is prepared to kill her own daughter in order to save the Sanctuary Network.

The team prepares for the last stand against an overwhelming enemy, and Will and Dr. Magnus have one last talk on the highest tower of the facility. Dr. Magnus advises him to leave, but he refuses. The Cabal slip a remote hack past Will's cellphone and it targets the defense system. All cameras are cut off and the EM Shield has been lowered.

Dr. Magnus encounters the Super Abnormals in her study and is able to take one of them out with the weapon. Tesla and Druitt take on three others in a hallway. Will is ambushed by two of them moments later, but Bigfoot, who has taken the cure in order to be able to fight, comes to his rescue. Tesla is ambushed by a female soldier, who is taken out by Dr. Magnus.

They all make their way to the Main Lab, where Dr. Magnus defeats another of the soldiers before finally facing Ashley, who almost knocks her out. Lying on the floor with the weapon aimed at her daughter, Dr. Magnus realizes she cannot do what must be done. She remembers how Ashley was as a small child. Ashley seems affected by the memory, but attacks her mother nonetheless. At this moment, Kate Freelander appears and fires at her with a shoulder-held rocket launcher.

Bigfoot and Will fight the last of the male Super Abnormals until Henry is able to reactivate the EM Shield. The soldier tries to teleport out, and bursts into a cloud of flames and ashes as the Shield kills him.

Kate tries to get Dr. Magnus out of the Main Lab, but the last of the other Super Abnormals, a female, assaults them. Before she can strike the fatal blow on Dr. Magnus, Ashley, who has returned to her true self, grabs her arm. Mother and daughter share one last look at each other, then Ashley teleports herself and the other soldier out, and they disintegrate into fire and smoke. Dr. Magnus is left behind, crying over her lost child.

Ashley Magnus
Add a photo to this gallery

Retrieved from "https://sanctuary.fandom.com/wiki/End_of_Nights,_Part_II?oldid=22304"
Community content is available under CC-BY-SA unless otherwise noted.