Start a Wiki
End of Nights, Part I 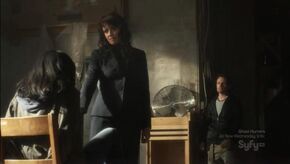 "End of Nights, Part I" is the first episode of the second season of Sanctuary, and the fourteenth episode overall in the series.

It is the first part of the Two-Part Season 2 Premiere.

In a desperate search to find her daughter, Magnus obtains top secret files that give her clues to the Cabal's catastrophic plan for the Sanctuary Network… and Ashley's devastating role in it.

Cairo, Egypt, six weeks after Ashley's disappearance from the Old City Sanctuary: A woman meets with a bald Egyptian abnormal named Assam. She presents a small case filled with tiny snakes, one of which he takes out and swallows with great pleasure. The woman, who turn out to be Helen Magnus, sits down and slams a gun on the table in front of her.

The two talk about information concerning the whereabouts of her daughter, and Assam taunts Magnus about life being much simpler for many abnormal criminals since Ashley is gone. Finally, they come down to business, and Assam reveals that he actually has nothing more to say to her. Magnus grabs her gun, but a number of bystanders turn out to be his bodyguards, pointing their weapons at her.

A few streets away, Assam is ambushed by John Druitt, who suddenly materializes in front of him and threatens to teleport him to "a place very cold" if he is not more forthcoming. Assam tells him and Magnus that the Cabal has complete control over Ashley's mind, and that she is more than she was before. He says that the girl they knew as their daughter is dead.

Meanwhile, two hard drives with secret data are stolen from an Interpol data farm in Montreal – by Ashley, who teleports out of the place before the guards can get to her.

Back in the Sanctuary, Dr. Will Zimmerman and Clara Griffin talk via webcams and an internet phone, trying to ease the difficulties the great distance between them – Clara has transferred to the UK Sanctuary – puts their romantic relationship in. She suggests they use nicknames, like "huggybear", something Will does not seem to enjoy. He tells her she should come home before she begins to think that cricket is a sport, when Nikola Tesla enters the room, making Will even more uncomfortable. He soon ends the connection only to be taunted by Tesla about love being an irrational, self-destructive instinct. However, Tesla actually wants to talk about Bigfoot, who still refuses treatment with the cure for the Lazarus Virus that Tesla has created.

Henry Foss visits Bigfoot, who is getting worse from the disease, and tries to persuade him to take Tesla's treatment. Bigfoot answers that his people will disown him if he takes an injection of human medicine, and that he will not betray who he is.

Back in Egypt, in the ruins of an ancient temple, Magnus and John Druitt talk about their running out of options. John also tries to cover the emotional distance between them, but Magnus makes it clear that she believes "Jack The Ripper" is still somewhere inside him. John in turn says he just wanted to know where they stand.

Meanwhile Henry informs Will about the stolen Interpol data, and both realize Ashley and her new teleportation abilities must be behind it. Will makes contact with an Interpol Agent in Montreal, who is impressed that the Sanctuary Network is given full clearance and custody of hardcopies of all the stolen data. The agent believes that the perpetrator disappeared into thin air, but Will cannot tell him anything.

In a secret Cabal research facility, a female Cabal Scientist, while listening to classical music, talks to someone about their hard work and how they have no time to talk. She asks her "companion", who turns out to be a sedated Ashley, how her day was, when Cabal chief of operations Dana Whitcomb enters the lab, inquiring on her patient's condition. The doctor says Ashley is in top form and everything is just fine. Whitcomb orders her to begin "Phase Two", so the doctor hesitantly injects her with some kind of substance. Ashley suddenly wakes up to the cry of "Mom."

In the Sanctuary, Henry pays Bigfoot another visit, angrily demanding to know why he cares about what his people think even though he has not visited them once since Henry was a child. Bigfoot angrily confronts him, but Henry's werewolf strength turns out to be a match for him. He then informs Henry that he cannot go home due to "mistakes" that have been made, but that he still intends to live true to the ways of his kind – even if it means death. An emotional Henry explains that Ashley may be gone forever, and that he cannot lose Big Guy as well.

Magnus returns to the Sanctuary, where Will informs her about one of the stolen files, something on "Project Montana", a secret MI6 operation from 25 years ago. Magnus remembers that it was about DNA modification, removing impurities from the genome of orphans. She was the one who advised the British government to shut the project down. The team meets in the main lab and deducts that the Cabal will use the six orphans whose DNA was "scrubbed" during Project Monatana to do something to their untainted genetic makeup.

Back in her lab, the Cabal doctor has begun to perform a procedure on Ashley. The young woman's body violently resists, but there is no escape.

Henry informs Magnus and Will that four of the six Montana Test Subjects have disappeared in the last few days, likely abducted by the Cabal. The two remaining ones reside in Vancouver and in Essex. John teleports to England and manages to secure one of the orphans, now a woman in her thirties named Ms. Kennair.

In the Cabal lab, Ashley awakens and realizes she now has vampiric strength and extendable fingernails like Tesla. She sneaks up behind the doctor, but when she is ready to strike, something holds her back. The doctor tells her that her urges are under control, and caresses a disturbed Ashley, as she poses no threat to her.

Magnus and Will arrive at the house of Martin Wood[1], the last orphan, in Vancouver. A young woman opens the door and asks who they are. She tells them to have a seat and leaves, but Will realizes something is wrong. There has been a fight in the house. They rush after the woman, who flees in a van.

The young woman, who turns out to be a headhunter, informs her Cabal contacts that she is being followed. Henry, Magnus, and Will chase her to the docks. She almost gets away, but the team is finally able to get to her; however, the van turns out to be empty and Martin Wood is taken away on a motorboat.

The Cabal doctor tells Ashley that she once had a daughter who would be about Ashley's age had she lived. She then informs her that this is the last time Ashley will feel any pain, and that she will miss her.

Magnus and her team are in a warehouse, interrogating the headhunter, who identifies herself as Kate Freelander, a freelance operative working for whoever pays best. She taunts them and refuses to talk, until Magnus nearly shoots her in the foot and tells her the Cabal has her daughter. Will convinces Magnus to go out and calm down. Meanwhile, Freelander tricks Henry and gets away in their car.

The Cabal Scientist and Dana Whitcomb discuss the changes they have done to Ashley. Whitcomb also mentions that they failed to acquire one of the Montana Test Subjects, and that they must not underestimate Helen Magnus and Nikola Tesla.

In the main lab, Magnus and Tesla analyze Ms. Kennair's DNA, realizing that the young woman is, for all intents and purposes, a genetically perfect human, more perfect than anything nature could ever produce. They eventually realize that the Cabal intends to implant Ashley's Source Blood-induced Super Abnormal powers on these "blank slates", effectively making copies of Ashley.

Dana Whitcomb gets a call from Kate Freelander, who inquires why no money has yet arrived on her account. Whitcomb tells her that she should not have gotten captured by Magnus and that their business relationship is over. Seconds later, laser markers appear on Kate's body, and she jumps out of the car just in time before it is fired upon by several snipers.

Kate makes it to the Old City Sanctuary, where Henry is less than pleased to see her again, especially since she had no problems getting past his security systems. Before she can taunt him some more, she collapses into his arms, having lost a lot of blood from a shot to the leg.

Kate wakes up in the Sanctuary's infirmary. Magnus has attended to her wound, but also handcuffed her to the bed. When she refuses to share her insights in the Cabal, Magnus orders Will to drop her off at the nearest public hospital. Kate finally talks, informing them of a Cabal station in Alberta.

Henry checks the area and finds a remote research facility in the designated area.

Druitt teleports Magnus, Will, and Tesla to the facility, which turns out to be empty, and a set-up: Ashley materializes, with eyes burning like fire, and an expression of emotionless determination on her face. They realize something is wrong. Her father tries to get to her and they have a "teleportation duel" that Ashley wins. Tesla is also swiftly overwhelmed, and Will's bullets cannot harm her either. Druitt teleports everyone out and they realize worse things are about to happen.

At the Cabals headquarters, Dana Whitcomb informs the senior heads of the organization that "Phase Three" is under way. She shows them the six superabnormal warriors, led by Ashley, who are now ready for their first mission: the complete destruction of the Sanctuary Network.

Helen, Will, and Kate

Will, Kate, and Helen

Helen and John
Add a photo to this gallery

Retrieved from "https://sanctuary.fandom.com/wiki/End_of_Nights,_Part_I?oldid=21173"
Community content is available under CC-BY-SA unless otherwise noted.