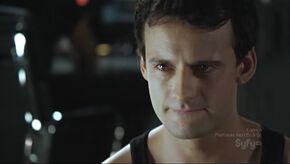 Edward Forsythe is a human business man and collector of "rare stuff".

He traveled to Mumbai to locate the Cult of Kali in order to acquire the Macri. He located Paveljit, the human carrying it but not before he was able to hide it in a safe place. After the Macri was found by Will Zimmerman and entered his body, Forsythe kidnapped Will and forced the Macri out of his body. He proceeded to swallow the Macri and take control of Big Bertha. He commanded Big Bertha to travel to the intersection of three tectonic plates at the bottom of the Indian Ocean and commanded it to create land in an attempt to re-create Pangea. He was on his ship in the Indian Ocean when Big Bertha launched a massive Tsunami after being angered by depth charges. Helen Magnus manages to sever his connection to Bertha, causing the Macri to abandon him and leave him fatally ill. Forsythe then teams up with Magnus to stop the disaster after she was kicked out of her position as head of the Sanctuary Network. He is later killed by a missile fired at him from Terrence Wexford's ship, deciding that he was already dead due to the Macri leaving his body. Thanks to his sacrifice, Magnus and his crew are able to escape and take control of Wexford's ship, who's crew switches to Magnus' command willingly. [1][2][3]

Retrieved from "https://sanctuary.fandom.com/wiki/Edward_Forsythe?oldid=14798"
Community content is available under CC-BY-SA unless otherwise noted.