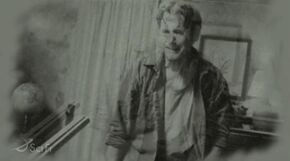 "Edward" is the eighth episode of the Sanctuary TV series.

A young artist with an uncanny ability to draw remarkably detailed pictures from memory may be the key to solving a case surrounding the suspicious death of his abusive father.

Ruth Meyers stares in horror at her dead husband, who lies on the floor in a pool of blood, with a rifle lying next to him. Their son, Edward, sits on a nearby bed, rapidly drawing a picture that shows his father with a demonic expression on his face. Around them, the walls are full of sheets with scenes of horror and anguish drawn on them. Edwards doesn't even seem to notice where he is, he just draws, and draws, and draws...

Dr. Will Zimmerman meets with his former colleague, police detective Joe Kavanaugh, who tells him that there has been a suicide. The man (Mr. Meyers) shot himself in the chest, which Will finds suspicious since men tend to shot themselves in the head when committing suicide. Kavanaugh then shows him a number of drawings by Edward, including some of abnormals, which the boy allegedly draws within minutes without looking. Will has 48 hours to investigate.

Back at the Sanctuary, Will, Dr. Magnus, and Ashley, looked at some of the drawings, including a caption of the Sanctuary itself, apparently created about ten years earlier, when the north tower was renovated. The team prepares for an interview with Mrs. Meyers and her son.

Big Guy brings Henry Foss something to eat, but Henry is busy brooding over his existence as a werewolf. Meanwhile, Ashley and her mother are training together at the shooting range, and Magnus tries to have a talk about John Druitt being Ashley's father. Ashley eventually tells her mother that what really hurt her was the fact that Magnus was not the one telling her the truth.

Magnus and Will sit down with Ruth Meyers in the garden, while Edward finds something to draw. Mrs. Meyers explains that Edward was always special, but that his motives have not always been as dark as they are now. During the conversation, Will notices a number of burn marks on Mrs. Meyers' arms. He mentions that her older son, Robbie, got in trouble for starting fires, but she tells him that he stopped that long ago, and that his father drove him away when he was 14. Will then enquirers if Mr. Meyers was abusive, to which Mrs. Meyers answers that he was a good man. She recounts how her husband confronted Edward with the gun, and how he suddenly turned the weapon on himself and shot. They then decide that Edward should stay at the Sanctuary for a few days.

Dr. Magnus is told by Big Guy that Henry seems to be spiraling down, and Henry indeed faces emotional and physical anguish as his werewolf side tries to come to the surface.

In the night, Henry and Dr. Magnus have a talk in the library. Henry has trouble sleeping and eating, and fears that he may eventually lose control over himself. Magnus recalls how she found him on the moors as a young boy.

Will visits Edward, who is still busy drawing monsters. The youth seems disturbed and tries to talk to Will, but it is difficult for him.

On the following day, the team asks Edward to draw a picture of Chinatown, while they measure his eye movements. They soon realize that Edward's visual apparatus seems to work like an image scanner, rapidly moving in parallel sweeps and archiving the footage like a computer in less than a minute. He also can see the true form of things, and the true personae of people.

Edward himself states that he simply draws what he sees, and that his father used to scare him, but would never hurt him. Will forces him to remember the events at his home, and Edward states that he grabbed the gun and accidentally killed his father.

In the laboratory, Dr. Magnus verifies that Henry's body has entered a new metamorphic phase. Henry fears for his friends' safety, and asks her for a way to stop the process. Magnus tells him of a surgical procedure, but it is very dangerous and could change his personality.

Will looks at evidence from the crime scene, and realizes that both Edward's and his mother's accounts of the event seem to be somehow wrong. Detective Kavanaugh calls him and tells him that Ruth Meyers demanded to have her husband's body cremated and that the police now sees her as a suspect. Will and Magnus then visit the Meyers home, and will discovers a small hidden cellar with cuffs to hold a person. They suspect that Edward was held in there like a prisoner. Mrs. Meyers begins to cry.

They ask Mrs. Meyers what the cellar was for, and she explains how her husband threatened to take the boys if she ever left him. Back in the Sanctuary, Magnus and Will have an argument about whether or not to inform the police of their discoveries. Magnus thinks that if they could get Edward to render key moments surrounding the fatal shot, Henry could program the computer to fill in the missing frames, thus creating a kind of "movie" of the night.

On his way to the lab, Edward meets Henry in the elevator, and has a vision of Henry a child, as well as one of Henry in full werewolf form, a very powerful and frightening image. Henry then goes to Magnus and asks her to prepare the surgery. Ashley is upset about the possibility of losing him, and tells him so.

Magnus and Will finally get Edward to draw a number of key moments from the night his father died, and realize that there was another person in the room besides him and his parents. They interrogate Edward, who gets angry and suffers a seizure. Suddenly, beams of heat come out of his eyes and almost ignite Magnus' costume.

After Edward has been put to rest, the team discusses what has happened, and they realize that the young man's heat ray eyes may be the explanation for the heat marks found in the apartment and on Ruth Meyers' body. Discovering that the father suffered seizures as well, they conclude that Glen Meyers built the chamber under the apartment for himself.

Will has another talk with Edward, who agrees to draw more sketches from the fateful night in order to prove his mother's innocence. Meanwhile, Big Guy and Henry talk, and the Bigfoot explains that all great gifts come with a curse.

Edwards finished the captions of the night at his home: his older brother, Robbie, visited him, but was surprised by their father, who was drunk at the time. Their mother would soon join the scene, and in the middle of the fear and anger of the situation, Edward became afraid and Mr. Meyers (the father) fell further into his suicidal state of mind. While Robbie grabbed the gun, their father, apologizing to his sons, used his heat ray eyes to purposefully ignite the charge, causing the gun to go off without anyone pulling the trigger (it was, indeed, a suicide).

Will meets with Joe Kavanaugh again, who tells him that the entire Meyers case has been pulled, and that someone powerful is protecting the family. The Sanctuary team continues searching for Robbie, when Henry suddenly smells something with his new werewolf senses. He leads the team and Edward to a hidden cistern, where the brothers are reunited. Before they leave, they all stare in awe at the cistern's ceiling, where Robbie has created an exact replica of Michelangelo's iconic ceiling painting in the Sistine Chapel.

Impressed by what an abnormal's power can contribute if given the chance, Henry chooses to cancel the surgery and try to live with what he is becoming.

Retrieved from "https://sanctuary.fandom.com/wiki/Edward?oldid=15970"
Community content is available under CC-BY-SA unless otherwise noted.