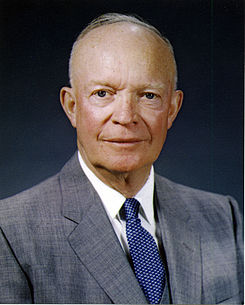 He met Dr. Helen Magnus and most members of The Five before or during World War II, and sent them on a number of missions, including one on D-Day where they had to retrieve a weather-controlling machine that was to be used against the Allied invasion fleet.[1]

At the end of the war, he asked Magnus to take part in the Third Reich surrender ceremony, as he was unwilling to be in the same room as Alfred Jodl.[2]

Retrieved from "https://sanctuary.fandom.com/wiki/Dwight_D._Eisenhower?oldid=21521"
Community content is available under CC-BY-SA unless otherwise noted.