Start a Wiki
Dr. Will Zimmerman 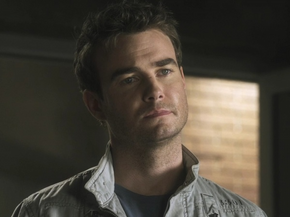 Dr. William "Will" Zimmerman is a forensic psychiatrist in Old City recruited by Dr. Helen Magnus to work for the Sanctuary Network.

Will's mother, Mary Anne Zimmerman, was killed by an Abnormal in front of Will's eyes when he was eight years old. Everyone Will talked to thought he was crazy because he told people a monster killed his mother. Eventually, Will convinced himself that the monster he saw wasn't real and became obsessed with perception, he even published several papers on how easily the human mind can perceive an illusion as reality.

He was acknowledged as a good man with an excellent talent for psychiatry and analysis. But, his inability to adjust to the status quo of investigating crimes has resulted in him losing his FBI job, and he then began working as a consultant for the homicide department of the Old City Police Department. While working for the department, Will's co-workers mocked Will by calling him Sherlock Holmes as he had the habit of thinking too far outside the box and over analyzing things, refusing to accept the simplicity of some cases.

After being recruited by Dr. Magnus in her work at the Sanctuary, Will discovers a new and strange world that is both unbelievable yet completely plausible to him. While his ideas have put him ahead of his time, he finds the world of "abnormals" to be fantastical in a way he can ultimately understand.

Although Will was less than comfortable at first, he has proven himself invaluable in gaining the confidence of his first patient, an abnormal child named Alexei. This only serves to prove that Magnus was right about his instinct and genuine thirst to know the truth. And she knows that he will prove invaluable to the Sanctuary. He has also totally proven himself to Ashley Magnus after helping to rescue her from what could have been her death.

His choice to stay at the Sanctuary is made after a conversation with Dr. Magnus when she reveals her deepest secrets to him. He asks this of Magnus because of the fact that he has been thrust into a world that he repressed as a child and explains to him how she was there the day an abnormal killed his mother. Even after learning this fact, Will still decides to work for Magnus as Will can see past the monstrous appearances of some abnormals in order to see how desperately some abnormals need their help.

As Magnus' second in command, Will has knowledge of all aspects of the Sanctuary Network as well as access to all of Magnus' contacts and resources. Nikola Tesla exploits this aspect when he uses a clause in the Sanctuary charter to temporarily depose Magnus as the head of the Old City Sanctuary on the grounds of (Magnus') ill health when Magnus refuses to cooperate with Adam Worth to locate Praxis, even in the face of her rapidly deteriorating health due to radiation poisoning, the cure for which could only be found inside Praxis. With Magnus technically  being unfit to take command due to the radiation poisoning that is slowly killing her, the role passes to Will by default, who then decides to take the risk of working with Adam Worth to save Magnus. Magnus lodges her protests at his decision but does not challenge his authority, accepting that according to the protocols she herself had drafted, Will was in charge until she made a full recovery. Will and his team succeed in finding a cure for Magnus, but his decision to allow Adam Worth a way back to Praxis has unintended and far reaching consequences, indirectly leading to the destruction of the city at Adam Worth's hands.

In the alternate timeline created by the Guardian, Will and Kate Freelander have a son named Magnus. Will is killed in battle against the infected.[2]

Dr. Helen Magnus
Magnus saved Will's life when he was attacked by an abnormal as a young boy. Unable to save his mother, she secretly watched over him well into his adulthood, and eventually recruited him as her protegé and could-be replacement should anything happen to her. They greatly respect each other, and Will relies on her as a mentor as much as she relies on him as her second-in-command.

Meg
Will was in a relationship with her for several years, but they broke up just prior to his introduction to Magnus and the Sanctuary. Meg seemed to still have feelings for him, but found it impossible to live with him any longer.

Clara Griffin
Will and Clara share a kiss not long after meeting during the crisis surrounding the Cabal's Lazarus virus. They have a long-distance relationship for some time, with him staying in Old City and her living in the UK Sanctuary. When the facility comes under attack by the Cabal's superabnormals, Will asks Clara to evacuate with the other residents, but she refuses to go, and is killed in the fighting.

Abby Corrigan
Will and Abby first met during a course at the FBI academy in Quantico, but she did not leave much of an impression, as he could not remember her when she came to see him at the Sanctuary in 2010. However, at that point, they were immediately attracted to each other, and ended up going on a date shortly after solving the case Abby came to discuss. This proved difficult, as they got into trouble with abnormals on both of their first dates. As of now, the two are in a happy relationship.

Mr. Zimmerman (portrayed by Al Sapienza[3]) is a male human who is Dr. Will Zimmerman's father, the son of Capt. Jack Zimmerman, and the widowed husband of Mary Anne Zimmerman. After Will's mother Mary died, the relationship between himself and Will became very rocky and unloving. Eventually Mr. Zimmerman got arrested and put in jail. After several long years, he was released, and during Will's birthday in Season 4, Dr. Helen Magnus brought Mr. Zimmerman to the Sanctuary to help father and son reconnect.

His current status is: Alive.

Danny Bradley (portrayed by Byron Lawson) is a male human who is the husband of Kayla Bradley and the best friend of Dr. Will Zimmerman.

He worked with the homeless in Old City and went missing. His wife, Kayla, alerted Will who went looking for him and discovered that he'd been kidnapped by the Cabal for use in their supreme fighter program; being turned into an abnormal with super-strength and heightened aggression. He was eventually freed by the Sanctuary team, treated by Dr. Helen Magnus to reverse his physical condition back to normal, and returned safely to his wife.[4]

His current status is: Alive.

Kayla Bradley (portrayed by Rukiya Bernard) is female human who is Danny Bradley's wife. She works with Danny helping the homeless population in Old City. She called Dr. Will Zimmerman for help when her husband vanished.[4]

Her current status is: Alive.

Will Zimmerman
Add a photo to this gallery

Retrieved from "https://sanctuary.fandom.com/wiki/Dr._Will_Zimmerman?oldid=19601"
Community content is available under CC-BY-SA unless otherwise noted.