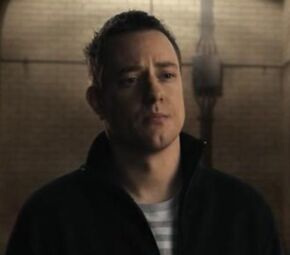 Declan MacRae is a human agent of the Sanctuary Network and the current house head of the UK Sanctuary.

He and Dr. Will Zimmerman tried to track down an empathic abnormal when "The Adjuster" intervened, believing them to mean the empath harm.[2]

When Dr. Helen Magnus became mentally unstable and was accused of murdering Bigfoot in late 2009, MacRae convinced the Network heads to transfer control of the Old City Sanctuary to him. This earned him the anger and distrust of Will Zimmerman, who accused him of using Magnus' temporary weakness for his own personal agenda. The whole affair was later revealed to be an elaborate scheme by Magus herself to find a traitor within the Network.

A short time later, he returned to the newly repaired UK Sanctuary and was instated as full-time house head. When the Macri sent out a signal to Big Bertha, causing her to send out a wave that caused a Pteranodon to behave irrationally, he and his team were able to subdue it until it calmed down.[3]

After the Big Bertha crisis, Declan secretly pushed the council of house heads to conduct a vote on the future leadership of the Sanctuary Network. The council decided to confirm Dr. Magnus as their leader, and to remove Terrence Wexford from his position as head of the New York Sanctuary, a result Declan seemed very content with.[4]

Some time later, Declan was contacted by Will and Henry during their investigation into the Oldham Psychiatric Institute. Once they had discovered that werewolves were being held there against their will, he moved in with his Sanctuary's forces and took control of the facility, taking Lillian, the leader of the clan, into custody.[5]

Declan led the team that investigated Hollow Earth after the disappearance of Helen Magnus, and reported the destruction of Praxis. As a member of the Executive Committee, he spearheaded the decision to appoint Will Zimmerman as acting head of the global network in Magnus' absence.[6]

While Kate Freelander is at Hollow Earth he seems to have replaced her such as invesgating why some Abnormals were vaporised in Old City[7], searching a Russian icebreaker[8] and trying to cure Abby Corigan when she was infected by an abnormal that changed her DNA.[9]

Declan is very aware of the political inner workings of the Sanctuary Network, and believes Will Zimmerman to not yet have the experience to lead a Sanctuary. He is also a staunch supporter of Helen Magnus.

Retrieved from "https://sanctuary.fandom.com/wiki/Declan_MacRae?oldid=12541"
Community content is available under CC-BY-SA unless otherwise noted.