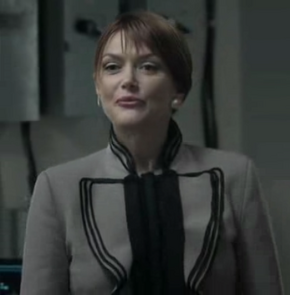 She oversaw many important Cabal projects, including the creation of the Lazarus Virus and the abduction of Ashley Magnus.[2]

In Season Two she oversees the converted Ashley and the other Superabnormals attack the Sanctuary Network and with relish informs a distraught Dr. Helen Magnus that her daughter would be returned to her in exchange for the Sanctuary's complete surrender. What Whitcomb doesn't bargain on is Helen's determination to protect the Abnormals and her allies as well as the predicted desire to save Ashley. Indeed she is noticeably disturbed if not scared that she has made such a determined enemy when Magnus releases a Fire Elemental on her own daughter in order to defend the UK Sanctuary.

However the Cabal and Whitcomb's overconfidence and arrogance proves to be their undoing for despite pumping Ashley full of drugs to insure her loyalty they underestimate the bond between parent and child. It is this very bond that the Cabal had hoped to use to defeat Magnus but a distraught Magnus actually uses to free Ashley when she is confronted by her daughter who is prepared to kill her. Heartbroken and unable to use the weapon Henry Foss and Nikola Tesla designed to stop the Superabnormals Magnus pours her heart out to her daughter to remind her of who she is. This combined with a blast from a weapon fired by Kate Freelander seems to free Ashley who ultimately sacrifices herself to save her mother from the last Superabnormal.

In the end the Sanctuary is successful in defeating the Cabal and Whitcomb is forced to flee for her life when Ashley's enraged father, John Druitt begins hunting down and killing the heads of the Cabal in revenge for what they did to his daughter. In the end, Druitt catches up with her in France, and after spying on her in secret, he follows her out of a café. It is unknown what her fate is, though her death is seemingly implied.[3]

Retrieved from "https://sanctuary.fandom.com/wiki/Dana_Whitcomb?oldid=19716"
Community content is available under CC-BY-SA unless otherwise noted.