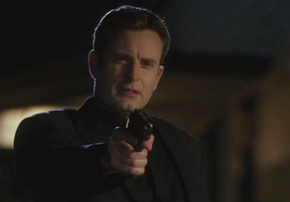 Clark was a fanatical hunter of Abnormals and those who protected and supported them.

Posing as a priest who worked at the same church as Father Nathaniel Jensen, he did not share the former's belief that Abnormals should live in peace with humans, as he regarded Abnormals as monsters. He killed Jensen and forced the lead police officer investigating the case, whose family was held hostage, to state that Jensen committeded suicide. He later observed Kate Freelander and Bigfoot when they captured Danny Stephano. Bigfoot even saw him but could not identify him as he was wearing a hood over his head. Later on, he comforted Bigfoot, and smiles evily when the Abnormal left.[1]

Some time later, Clark planned to sabotage an abnormal meeting; when Bigfoot, Will and Kate arrived in the building he pretended to not know anything and eventually had his cover blown after this he released a swarm of abnormal insects. He attempted to make a run for it, but was cornered by Bigfoot; he told the Abnormal that he was a disgrace and shot him several times before being suffocated by Bigfoot, killing him. Bigfoot then collapsed on the floor, but survived in the end, having rid Old City of Clark.[2]

It is never clearly stated if Clark was really a priest or if that was just a cover; however, the way he quickly deposed of his clerical collar once he was alone suggests the latter.

﻿
Retrieved from "https://sanctuary.fandom.com/wiki/Clark?oldid=13992"
Community content is available under CC-BY-SA unless otherwise noted.