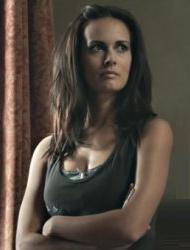 Clara Griffin (portrayed by Christine Chatelain[1]) was an Abnormal and the granddaughter of Nigel Griffin, the Invisible Man.

As the last surviving descendant of Nigel Griffin, she inherited his place as a member of The Five after he and his daughter, her mother, passed away. Like her grandfather, she possessed the ability to turn invisible effortlessly, though at first, when she was stressed it was more difficult for her. Nonetheless, she used her powers for theft in order to thrive. The team recruited her when The Five had to reunite in order to acquire the Source Blood to stop the Cabal's Lazarus Virus. She was reluctant to join, but agreed to help after Dr. Will Zimmerman told her millions would die if the Cabal were allowed to succeed.[2]

Clara had lived much of her life believing that she and her family were one-offs or freaks and was unaware of the Sanctuary or the Abnormal world at large. As a result, she was surprised and amazed by the Abnormal world she discovered, and was convinced by Will to stay with the Sanctuary Network where she could better learn about her powers and be in a place where people accepted her.

Prior tp the Network finding her, Clara apparently exploited her powers of concealment for petty theft.

The rest of The Five had mixed reactions to Clara when first meeting her: John Druitt was disgusted when they learned she had been using her powers for theft, while Dr. Helen Magnus was unsure at first if Clara was up to the task they where about to undertake. Dr. James Watson was guarded around her but felt she could live up to her grandfather's name, while Nikola Tesla liked her instantly because of her attitude. Clara nearly failed to retrieve the key she was responsible for that was needed to retrieve the source blood due to her inefficiency controlling her power. She barely managed to complete the objective with Will's encouragement, nearly dying in the process.[3]

After Ashley Magnus was taken over by the Cabal, Clara was transferred to the London branch of the Sanctuary network. This put a strain on her evolving romantic relationship with Will.[4]

During her time in London she learned to control her invisibility which she attempted to use in the defense of the UK Sanctuary from the Cabal invasion. Unfortunately the invaders had a way of detecting invisible beings, resulting in her detection and subsequent death.[5]

Clara is an Abnormal with the power of invisibility, having inherited it from her grandfather Nigel Griffin, who obtained the trait from the source blood. Like Nigel, Clara's molecules have photo-sensitive properties that enable them to affect light in such a way that they render the entirety of Clara's body imperceptible to the naked eye. Unfortunately, the concealment does not extend to any item or clothing that she has on her person, which is why she had to strip naked in order to become completely unseen. For this reason, Clara typically wore clothes that are easy to remove.

She also initially had limited control over her power, as Clara apparently had difficulty turning invisible while she's being watched. She used to visualize her targets naked in order to find the necessary focus to accomplish the deed. After her time with the London Branch, Clara's control progressed to the point where she was able to freely "toggle" in and out of her invisibility at will.

Other than that, she is a very weak fighter. Even while invisible, Clara was barely able to hold her own against John Druitt when he and Will finally detected her presence, prompting her to escape instead. She was killed off-screen by one of the Cabal's super-abnormals in her last episode.

Retrieved from "https://sanctuary.fandom.com/wiki/Clara_Griffin?oldid=19651"
Community content is available under CC-BY-SA unless otherwise noted.