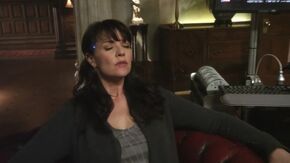 Magnus hooks up to the virtual world.

"Chimera" is the ninth episode of the fourth season of Sanctuary, and the fifty-fifth episode overall in the series.

A dangerous computer program threatens the Sanctuary, prompting Magnus and Tesla to delve into the computer network.

Late at night, a mechanical spider makes its way through the halls of the Old City Sanctuary, all the way to the room of Helen Magnus. It crawls into her bed and towards her face, but she suddenly wakes up and grabs it. After putting it away in the lab, she asks Henry to check the security cameras. They discover that the spider was already in Will's and Henry's room. Magnus examines Henry, and discovers two puncture wounds in the back of his skull.

Will is checked and has the same marks from the spider, which is in fact a device used by two intruders working for Adam Worth a year earlier. It has somehow gotten free, likely due to a release code being sent to its container. Henry goes to investigate.

When the front door bells rings, Will goes to check, just as Henry discovers a hidden sector in his own computer system. He wonders who could have built it, but the answer is already at the door with Will, demanding to see him -- Nikola Tesla.

Tesla explains that he had to connect the spider device to the computer system months ago in order to find the correct coordinates in Hollow Earth for John Druitt to teleport in. However, the device has left behind a sentient organic nanite that Tesla locked behind a number of firewalls. It got free when the system was changed on Magnus' orders, and now will try to gather whatever data it can find.

Tesla and Magnus decide to enter the computer system through a neural interface. Henry activates the system, causing the two to reappear in a digital copy of the Sanctuary. They try to find their way to the equivalent of Henry's office, but the rooms are changing around them. They end up in a dungeon-like room filled with books and notes, and suddenly a figure comes running towards them. Both are shocked to recoginze Adam Worth, who bids them a hearty welcome.

The digital version of Adam greets them kindly and offers them beverages. They ask him about the nanite, and he is very eager to help. They deduce that fractions of Adam's personality were downloaded into the nanite, along with the complete knowledge base of Praxis.

In the real world, Henry tells Will that if the nanite were released into the public, it could take over every computer in the world.

In the system, the "Adam" interface tries to remember more details by "reading" the books around it. It mentions Ashley, noticing how the name makes Magnus sad. After finishing the containment process, Magnus and Tesla return to the real world. Henry tells them he has contained the nanite on an independent harddrive.

Magnus goes back to sleep, but is awoken in the middle of the night by "Adam", who reveals that she never actually left the computer system. He reads her a story from one of his books, which holds information on the history of the Five, as Tesla storms in to let her know they are still in the computer.

Magnus and Tesla realize that everything that has happened so far was an illusion within the illusion. "Adam" wants to keep them around because their presence makes his existence more interesting. He wants to learn more, especially the reason why he cannot remember the rest of "his" life. Probing her mind, he finds images of Ashley and the day she died, taking pleasure from how the memory affects Magnus.

Soon "Adam" remembers Magnus causing his death and that of his daughter, and tries to kill her. His attention is distracted from Tesla, who attacks him from behind. They get a boost from the real world, where Will gives Magnus adrenalin in order to strengthen her system. They drive "Adam" away and make their way back to the interface. Magnus removes it to discover the representation of Henry's lab they were originally looking for. However, "Adam" soon catches up with them, hitting them with a lighting bolt that causes them to flatline in the real world.

Will explains to Henry that their brains are shut down, but the rest of their bodies still works. He orders Henry to replicate the Praxian device that reanimated them in Hollow Earth after their execution.

"Adam" holds Magnus and Tesla, and begins to understand the difference between the real and the virtual world. He wants to take over one of their bodies to be able to walk about freely.

With his magnetic abilities, Tesla is able to send an encrypted message in Praxian that the rest of the team discovers. "Adam" catches them and shuts of the connection, but they discover that he has power problems when he tries to multi-task. Using this advantage, they get away again. Will realizes that in order to help them, he has to go virtual as well.

Will arrives in the computer system and is greeted by Magnus, while Tesla has traced the magnetic flow to the nanite. "Adam" catches him and the others after they arrive, and tells Magnus that she must decide which body he should take over. To Will's shock, she choses him, and "Adam" takes over his mind.

Henry and Bigfoot prepare the reanimation device in the real world.

"Adam", now in Will's form, bids Magnus and Tesla farewell, but is unable to leave the virtual environment. Magnus reveals that she has in fact taken control of the system. She and Tesla leave the angry nanite behind, as it is now locked in; Will was never actually hooked up to the system: they used the spider device to mimick his mind.

Magnus decides to return the record of Praxis' history to Hollow Earth. Bigfoot volunteers for the job, looking forward to seeing Kate again.

Later, Magnus and Tesla share a glass of wine. Tesla asks if Magnus would really have chosen him over Will, to which she says, "Do you really have to ask?" He appears not entirely sure what that implies. 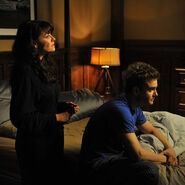 Will and Adam
Add a photo to this gallery

Retrieved from "https://sanctuary.fandom.com/wiki/Chimera?oldid=16976"
Community content is available under CC-BY-SA unless otherwise noted.