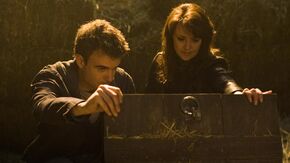 Will and Magnus investigate the secret of Carentan.

Written By
James Thorpe
Directed By
S.A. Adelson
Chronological Information
Preceded By
"Normandy"
Followed By
"Out of The Blue"

"Carentan" is the eighteenth episode of the third season of Sanctuary.

A colleague vanishes amid unexplained disappearances in the town of Carentan, where Magnus and her team run into a military blockade during their investigation.

It is night in Old City. Declan MacRae contacts Magnus via video phone, informing her about a number of disappearances in the town of Carentan in Normandy, France: a farmer and his animals, some tourists, and a bus full of seniors seem to have vanished without a trace. There seems to be a media blackout; even the satellite feed of the area is being censored. Declan has sent Ravi, the head of the Mumbai Sanctuary, to investigate, but has he disappeared as well after reporting a strange sensation.

Magnus and Will try to find someone among their contacts in the global intelligence community who can tell them what is going on, with little success. Kate and Bigfoot find a good entry point six kilometers south of Carentan; Declan insists on joining the team.

Once in France, they run into a road block set up by a private security firm (revealed two episodes later as the Lotus Defense Corps). Kate acts like she is car-sick, and they quickly overpower the guards, continuing to an encampment where Magnus angrily demands to know who is in charge. A man in his fifties comes out of one of the tents, and orders her inside—alone. He then tells her that her reputation precedes her, which she cannot say about him. He is unwilling to even tell her his name. She cuts to the chase, telling him that the toxic leak cover story he and his men put up is a joke, and that the surface-to-air missiles outside suggests he is up to something. She also demands to know what happened to Ravi, and even offers her help with whatever goes on, but he tells her it's above her pay grade.

The team leaves, discussing the strange security firm and its secret mandate, when Magnus spots a field that seems familiar to her. They stop, and find a barn from where an old tunnel leads past the LDC checkpoints; Ravi seems to have used it as well. Declan and Kate are ordered to stay behind, while Magnus and Will make their way behind "enemy lines". They notice that the forest is strangely silent, when suddenly a strange force passes by them and they are knocked out. When they rise, a young French couple comes by, carrying apples to the town. They invite them to come with them.

In Carentan, many people are working all over the streets of the town, with plants being processed everywhere. The couple introduces them to the "last one", who turns out to be an elderly Ravi.

Ravi explains that though they saw each other the last time six days ago from Magnus' point of view, he is now seventy-six years old. A massive time dilation field seems to slow down time in Carentan, causing forty years to pass while a week passed outside the town. An immense dimensional recoil kills anyone who tries to leave. Ravi also introduces them to his wife, Anna.

In an old Nazi bunker, Ravi and his assistant, Josie, explains that the time dilation field started three weeks ago in normal time, with the epicenter being a cave on a coastal cliff. Scientists and military, everyone who was sent in by the French government, vanished without a trace—including Ravi, the "last one". Magnus notes that she drove a fire elemental into the depths of the Earths, and that it might have something to do with what happened.

One Day in normal time equals six years in the dilation field, causing three years of daylight to be followed by three years of night. The "dark times" are very hard on the inhabitants of Carentan, and usually only the younger and stronger among them survive to see the next sunrise. Ravi notes that the next dark time will come in nine months—less than three hours in normal time.

Back in the barn, Kate and Declan argue about the right course of action, and decide to enter the tunnel when Lotus guards catch them. They are taken to the leader, who tells them that their colleagues may be lost forever. He has them imprisoned.

In Carentan, seven days have past. Helen tells Ravi that it is very hard to read the notes from the many different scientists who have worked on finding a solution to their dilemma over the last decades. He answers that she should give herself time; he also notes that Adam Worth used to work with time dilation, but Helen notes that he died months ago in Hollow Earth. She asks if he ever feels like quitting, but he tells her that the prospect of impressing her by solving this mystery kept him going.

Outside, Will and Josie take readings at the border of the time dilation dome. She shows him how one can feel the dilation field when one comes closer; she recounts how she once saw a young man die in the field. For her, this is the only world she has ever known.

Back in the base camp, Kate tries to flirt with her guard, and though he rebuffs her, she is able to steal his cell phone.

On Day 15 inside the dome, Magnus tries to use one of the last functioning motherboards to communicate with the outside world. They have to sent an incredibly stretched message in order for it to be received as normal on the outside; sending it will take about two weeks.

Declan and Kate contact Bigfoot, who tells them he picked up something odd; it appears like short bursts of static or interference.

On Day 33 inside the dome, the message is stil being sent when Will tells Magnus that Ravi wants the solar panels used to power the tranceiver to be routed back to other purposes. Magnus become more and more angry with the situation, but has at least learned that the dilation field is slowly growing—which will translate to a massive burst of growth outside that could swallow much of northern France—and within three weeks normal time, the entire world.

On Day 67 in the dome, Will and Magnus further discuss their options; Mangus wants to nullify the field at its original starting point; however, cerellium, a key element is missing. They have some of it in the Sanctuary, but Will notes that there is no way to contact their friends. Magnus disagrees: she has figured out a way. On a field, they create a large message with stones, saying "Ci", the elemetal symbol for cerellium, which will hopefully be visible for the satellites.

On Day 73, Ravi and Anna see Will sitting alone on a bench. Ravi goes to talk to him, and tells him that in the end, life in the dome will become easier.

Outside, Bigfoot has deciphered the radio signal and tells Declan and Kate that it came from Magnus.

On Day 152, Will and Josie work on some scrap metal when he asks her to look for a coil in a tool box. Upon opening it, she finds a birthday present with a flower inside. He made a necklace for her, and when he puts it around her neck, she kisses him. He is hesitant, and Josie realizes that it is about Abby, his girlfriend in the outside world. She tells him that she wants to have a family if they make it through the dark time, which surprises him. At this point, Magnus approaches, noting the awkwardness of the situation. They talk, and Will points out that unlike Magnus, he is not immortal: he may be dead before they are able to solve this problem.

Kate and Declan tell the Lotus team leader about the message from Carentan. Declan also sees the "Ci" symbol in the satellite feed, and unlike the other scientists, can identify it. At this moment, a message comes in that preparations for Project Greenhouse are being made; Declan and Kate realize that an attempt is going to be made to blow Carentan of the map with a massive airstrike.

Declan and Kate once again contact Bigfoot, who tells them to look around for what they could use as a substitute for cerellium. Kate soon sets her eyes on the LDC's weaponry.

On Day 225 in the dome, they sky is turning red; nightfall is only forty-five days away. Will and Magnus test a device that should help them influence the dilation field; however, the experiment goes wrong, and a number of people disappear. Magnus realizes that when Carentan resets itself to normal time, most of the people inside the dome have not been born yet. If the dome is removed, everything created, and born, after its inception, will never have existed. Only Ravi, Magnus, and Will will survive. Josie overhears their conversation, and runs away; Will follows her.

Josie angrily destroys records in their laboratory, until Will stops her. She begins to cry, asking how he could possibly just make her and the other vanish in order to get out. Will does not know what to say.

Outside, Kate and Decland try to disassemble a surface-to-air missile in order to get their hands on an alloy that they can use instead of cerellium. They put it in a car and send it into the dome. The Lotus leader informs them that in nine minutes, it will not matter, as the airstrike will be carried out.

The car arrives in the dome on Day 261, and Magus thinks she can make her device work. On the following day, she has a talk with Ravi while watching an incredibly slow sunset. He is not mad at her, knowing that the time dilation field would cause the continental drift to occur at many times its normal speed, ripping the planet apart. But he is also a husband and a member of a community. They take each other's hands, knowing what must be done.

On Day 263 in the dome, Anna tells Ravi that he must not explain himself to her; their sacrifice could save billions of lives. They kiss, and she tells him that she and the others will always be in his heart.

Magnus and Will prepare to use their device while a crowd gathers before the mayors office to stop them. They soon find them, and Josie holds them at gunpoint, saying they have no time right to decide who lives and who dies. Magnus presses the button, and Josie fires on Will. Ravi jumps in the way of the bullet as the time dilation field collapses.

Some time later, Magnus wakes up in a hospital bed, with Will sitting at her side. They made it out alive, but Ravi did not survive. Everyone else has vanished as Carentan returned to its normal state, and the airstrike was called off. Magnus notes that someone was responsible for what happened, and they must find out who it is.

Bigfoot, Kate, and Will

Will, Helen, Kate, and Declan

Helen, Will, and Ravi

Josie and Will
Add a photo to this gallery

Retrieved from "https://sanctuary.fandom.com/wiki/Carentan?oldid=16119"
Community content is available under CC-BY-SA unless otherwise noted.