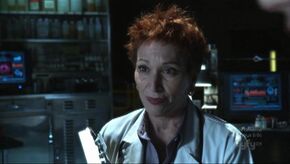 The unnamed Cabal Scientist was in charge of the program to turn Ashley Magnus into a superabnormal. After she injected Ashley with the source blood, she discovered the proper control medications that forced Ashley to do whatever the Cabal wanted.[1]

Retrieved from "https://sanctuary.fandom.com/wiki/Cabal_Scientist?oldid=14490"
Community content is available under CC-BY-SA unless otherwise noted.