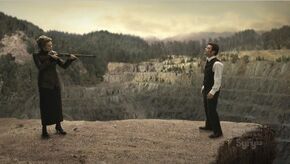 "Breach" is the seventh episode of the third season of Sanctuary, and the thirty-third episode overall in the series.

An anonymous call leads Magnus in to a trap and a confrontation with an old enemy seeking vengeance for a past betrayal.﻿

A distraught and injured Dr. Helen Magnus flees through a building onto the roof, and is followed by a strange figure in protective gear. After hiding for a few moments, she masks herself and attacks her follower, causing them both to fall off the edge of the roof.

Magnus, Dr. Will Zimmerman, and Kate Freelander enter an abandoned building after having received a distress call from an unidentified abnormal. They search the place, but cannot find anything, especially since their scanners are scrambled by EM interference. Magnus wants to call off the search, she realizes that she somehow knows the building. On the way out, Magnus is locked inside, and finds the glass of the door to be bulletproof. She attempts to leave through other doors, but with no success.

Realizing the abnormal is still in the building with her, she calls for him, when suddenly the figure in the strange gear attacks her. When she asks who he is, the man, who uses a kind of teleportation ability, answers "Helen. You look beautiful" and kicks her to the ground.

The fight continues, with the man telling Magnus that he waited a long time for this event. It is revealed that he is the one behind the recent attack on Will to steal his memories[1], and that he knows about the Holomap. He asks her about the location of the "keystones", and when realizing that she doesn't know anything about them, wants to finish her off. Magnus, however, gets away once more and hides. After bandaging her badly hurt hand, she builds an improvised tonfa and continues to look for a way out.

When looking out of a window, she sees a falling leaf frozen in mid-air, and realizes that time seems to have stopped outside the building. The stranger attacks her again, but this time she fights back with the baton, and manages to get off his headgear. Shocked, she addresses the young man as "Adam", and says that this is impossible, as he has been dead for a hundred years – since she killed him.

Magnus asks to talk to both the people inside Adam, indicating he has multiple personalities. After a brief and pleasant talk to the calm and reasonable side of him, the other, darker half resurfaces and asks her to call him "Hyde". It is revealed that he is the historical basis for Robert Louis Stevenson's Strange Case of Dr Jekyll and Mr Hyde, and still angry because he did not receive any money from the author. He uses a small device for his teleportation.

The hunt then continues, with Adam taunting Helen about the Five and the death of Ashley, seeing it as only fair since he thinks Magnus responsible for his own daughter's death. He also mentions that he has been to the real city the holographic model is based on.

Magnus tries to destroy one of several glowing devices on a wall, and is knocked unconscious. In a flashback, she hunts Adam to the edge of a cliff with a rifle in her hands a hundred years earlier. Once confronting him, she wants him to explain his actions. He refuses, and tells her to shoot him – which she does.

Back in the present, Helen once again tries to get out of a window, and sees a bird frozen in the sky. After finally finding her way onto the roof, she realizes that the entire building is surrounded by a bubble, outside of which time is practically standing still.

After returning inside, she is attacked by Adam once more. After another fist fight, she manages to talk to the calm Adam again. He explains that he had found a way to manipulate time, with help from the energy nodules which are based on the technology of Will's attackers. They also allow him to open subspace rifts for instant travel between places. Realizing that he cannot enter the rift exposed without harming himself, Magnus injures him on his arm.

She then makes a plan to trap Adam and creates protective gear for herself. She then returns to the roof (which is where the episode returns to the opening scene) and waits for him to follow her. After hiding for a few moments, she masks herself and attacks him, causing them both to fall of the edge of the roof. Before they hit the ground, they disappear in a subspace rift.

After the fall through subspace, they land back in the building, where Magnus seriously wounds Adam. She demands to know what the "keystones" are, and why her father sent her the message. Adam alludes that Gregory is with the creators of the strange technology, and that they are somehow connected to the earthquake that saved Pakistan from Big Bertha's tidal wave.

When the devices turn red and begin to flash in a manner resembling a self-destruct mode, Magnus gets Adam up and they flee from the building in the last second, just as time outside returns to its normal speed. They both end up close to Will and Kate, and Magnus tells them, "We're in trouble."

Retrieved from "https://sanctuary.fandom.com/wiki/Breach?oldid=21803"
Community content is available under CC-BY-SA unless otherwise noted.