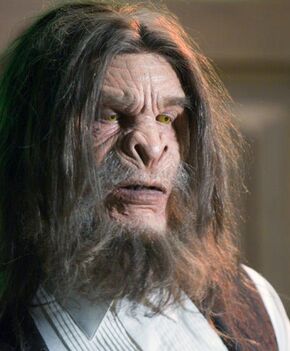 Bigfoot, also called Big Guy, is a humanoid abnormal and a former patient of Dr. Helen Magnus, who is now her manservant and a trusted agent of the Sanctuary Network.

Bigfoot arrived at the Old City Sanctuary in 1951.[1] After Magnus removed "more than a few bullets" from him, he would not leave the Sanctuary, so she gave him a position on her staff. He acts as a butler, chauffeur, bodyguard and general handyman. He appears to be an intelligent Neanderthal species. Before he met Dr. Magnus he liked to scare little children.

Later, Bigfoot is infected by an airborne pathogen created by the Cabal to wipe out Abnormals. Having recently determined that the pathogen causes paranoia and violence, Magnus puts him in isolation. Eventually, he begins to show the symptoms of the disease and tears up the isolation room. At one point, Magnus attempts to expose herself to the pathogen by entering the isolation room in order to determine whether her vampire blood has made her immune. Bigfoot wakes up and attacks her, and she is forced to stun him.[2]

Though Ashley (under the control of the Cabal) stole the source blood, Tesla had enough time with it to be able to synthesize an antidote and was able to distribute it among the infected, thereby avoiding a mass outbreak and total chaos. Bigfoot however refused to take the "man-made" antidote and has been using natural remedies of his people to stop the infection, succeeding only in slowing the virus and giving him a prolonged painful death according to Tesla. When a frustrated Henry spoke to him about how stupid he was being to do this to honor his people, when he had not visited them since coming to the Sanctuary, he revealed that he was an outcast for some unknown reason. When Henry said the Sanctuary was his family now, he just said he wouldn't forget who he was, so as Henry put it, he was willing to die "a psychotic, diseased animal" .

He is later visited by Magnus, who tells him that unlike the others she understands his reason because she has known him so long, but tells him things are changing and if they all don't pull together it will be the end of everything. She then leaves but not before leaving him a vial of the cure, telling him that she has faith in him and that this is the last time she will visit him. When Ashley and the other super soldiers arrive at the Sanctuary, Bigfoot has taken the cure arrives just in time to defend Will from two of the soldiers who were about to kill him.[3]

It is revealed that the Crixorum had forced him to join the Hollow Earth Abnormals in an uprising. He was part of a suicide bomb team, but was stopped by Dr. Helen Magnus and Kate Freelander. They got Sally to cure him of the mind control and he was eventually cured. Later Bigfoot is known to be still working with the Hollow Earth Abnormals. Later Bigfoot is attacked and killed by Caleb and a group of abnormals after they find out that he took a vial from Caleb.

Helen Magnus
Having come to Magnus for help with his wounds, Bigfoot became her trusted manservant and one of her closest friends. He often goes out of his way to protect her, and becomes uncharacteristically hostile towards anyone threatening her.

In the pilot, Ashley calls him "the big guy". Another name is not stated in the show, but the name "Bigfoot" is the one used by the creators of Sanctuary in promotional material and on the official website.

In Sanctuary For None, Part II Bigfoot is killed by Caleb and a group of abnormals after they find out that he took a vial from Caleb.

Retrieved from "https://sanctuary.fandom.com/wiki/Bigfoot?oldid=14750"
Community content is available under CC-BY-SA unless otherwise noted.