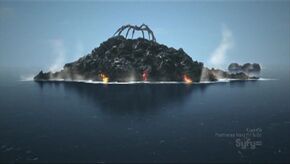 "Big Bertha" is the name of a marine arachnid-type Hyperspecies Abnormal. She is one of the most powerful beings on the planet, and a member seen in the Avatar Chamber.

Also known as "Kali", as she represents the Hindu goddess associated with eternal energy, this abnormal is capable of altering the magnetic resonance of her body to manipulate tectonic plates and cause underwater earthquakes,[2] as well as having the ability to create new volcanic islands.[3]

This makes Big Bertha the most dangerous Abnormal on the planet, and despite the Sanctuary Network's willingness to capture even dangerous Abnormals, in Big Bertha's case, they had protocols in place to kill her. It was thought Dr. Helen Magnus euthanized her.[2] However, this was revealed not to be the case; Magnus merely sedated her, as she thought that keeping her alive may have saved the Earth as well.[4] To prevent any fallout on her leadership, she lied about killing her.

However, Triad member Emma Correia discovered the possibility she was still alive, and apparently found her; the search turned up fruitless, as only her tracking device was found, and that she believed Bertha died too.[2] However, months later, Magnus admitted to have kept her alive.[4] News of this did not go well with the rest of the network, particularly Terrance Wexford, who would be given command over Magnus if she did not kill Big Bertha herself. Ultimately, Magnus attempted to stun her, which failed. Wexford overrode Magnus' command and attempted to kill Big Bertha with depth charges. However, that only succeeded in angering Big Bertha, who launched a massive Tsunami in response, which would devastate much of the coastline to the Indian Ocean.[3]

Dr. Will Zimmerman, a former host of the Macri connected to her, first attempts to stop her by reaching out to her with a dance. As Kali he initially convinces her to stop, but Wexford's attack causes her to change her mind. Will later tries again by being brought to the point of death where it is said Kali will appear a final time to her former hosts and there he manages to convince her to show mercy and bring an end to her tsunamis. Using her connection to other lifeforms, Bertha uses Red Algae to stop one of the tsunamis, but is attacked by Wexford again before she can deal with the other one, injuring her badly and knocking her out. Will apparently manages to convince the other beings who appeared to him with her to intervene and save her and they resurrect Will and use land-based earthquakes to create another tsunami to cancel out her last one. They apparently also heal Bertha, who is described as being alive but inactive.[5]

She is featured in:

Retrieved from "https://sanctuary.fandom.com/wiki/Big_Bertha?oldid=22341"
Community content is available under CC-BY-SA unless otherwise noted.