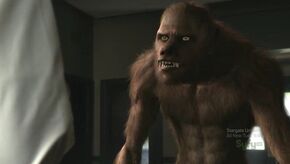 "Animus" is the sixth episode of the third season of Sanctuary.

Henry and Will investigate a werewolf sighting in England, while Magnus and Tesla try to crack a secret left behind by Gregory Magnus.

In a locked faciliy, an elderly man, Joe, is awakened in the middle of the night. A younger man named Liam wants to play a game of cards with him, even though he does not feel very well. Joe tells him to deal, when Liam suddenly turns into a werewolf and brutally kills him before fleeing from the facility.

Henry informs Will that there has been a werewolf sighting, but is unsure wether to ask Dr. Magnus if he can investigate the case. When he learns that the sighting was in Oldham, Northern England, Will decides to take the matter into his own hands, suggesting a "road trip" with just the two of them.

Meanwhile, Magnus and Nikola Tesla investigate the holographic city that appeared in the Sanctuary's library some time earlier. They find clues to the mysterious "Lands of the Lord of Brightness", and discover that the miniature city holds some kind of combination locks.

Will and Henry find a slaughtered goat in a park. A trail of blood leads them to the Oldham Psychiatric Institute, but London house head Declan MacRae informs them that the Network has had no success investigating the facility so far. He also tells them that they do not have enough for him to launch a full investigation. However, he also sees no reason for bringing Magnus' attention to the matter.

With Henry acting like a mental patient and Will like his doctor, the two gain access to Oldham. Henry is evaluated by a young and beautiful scientist named Erika, who discovers his abnormal reaction to some question. She speaks to her aunt, Lillian, the head of the Institute, in private, revealing that they both know Henry, and are puzzled how he found them.

Back in the Sanctuary, Magnus and Tesla gain access to the next "level" of the holographic city, but do not have the password, and the hologram shuts down, with all other lights going out as well.

Magnus tells Tesla that an electromagnetic pulse killed the electricity in the entire building. She tells him to "fix" her house, even though he would much prefer to keep trying to crack the city's code.

Henry befriends a young man named Alister, who tells him about Joe and Liam. Will is in the park talking to Declan on the phone, who tells him London has lost contact with Old City. Will also comes across a tree with visible claw marks. In Joe's room, Henry talks to Erika, but she tells him not to worry about that. She also asks him if he tooks his medication, which he lies about. Later, he breaks into the facility's morgue, where he finds Joe's body. When he takes the shroud away, he finds the dead man half transformed into a bestial form. Erika arrives, and informs him that Joe was a lycan. They all are.

Back in the woods, Will searches for more tracks, when suddenly a werewolf stands in front of him.

The lycan attacks Will, but is hit by a car when crossing a street, and runs away.

Lillian and Erika explain to Henry that the institute is a refuge of the last descendants of the Lycan clan. He in turn tells them about the Sanctuary, and that he was a foundling and doesn't know who his parents were.

In the Sanctuary, Magnus is in bed reading when Tesla enters, telling her he figured out the answer to their problem; hitting the city with a certain light spectrum should allow them to communicate with it.

Henry and Alister talk again, and Henry realizes that all Lycans seem to enjoy tinkering with machines. He also hears that everyone in the Institute is on medication, and that Erika has never transformed. He does so right in front of her, turning into an incredibly agile creature with large fangs and brown fur. Amazed by the sight and the fact that he is totally in control, she is also a little embarrassed by the fact that he is naked.

Tesla is able to reactivate the city, which scans both him and Magnus, and denies them access due to the vampiric source blood in their bodies.

When Henry tells Alister about how they could live outside and their werewolf nature, he answers that without the treatments they would all become "monsters", as Liam did. Later, Henry accuses Lillian of making the werewolves into monsters without the treatments so she can control them. He angrily tries to attack her, but is overwhelmed by some sort of electric probe/prod from behind and taken away by the guards.

In the Sanctuary library, the city disappears, living only an arming particle accelerator behind that could destroy the entire building. Tesla can slow the reaction by keeping a hand attached to it. Magnus suggests Tesla should create an EM field around them in order to make them disappear and shield them from the scanner.

In the woods near Oldham, Will finally finds Liam, who is very afraid and devastated that he killed his best friend stating he never meant to do so.

Meanwhile, Lillian has Henry strapped down and administers her treatment to him. She also argues with Erika, who wants to know if they could indeed live peacefully on the outside without loosing control.

With the help of Liam's insider information, Will enters the Institute, and finds the room where Henry was held earlier. The door is open, with claw marks on it. Moments later, Henry, transformed and very aggressive, appears.

Will tries to calm Henry down, but treatment has caused him to lose control of himself. Lillian and Erika arrive, and Erika transfroms in order to stop Henry from attacking Will. After a brief struggle between them, they both return to their human form, and happily smile at each other. Will states that "no one needs to be locked up like this".

In the library, Magnus and Tesla learn that the builders of the map mistrusted vampires, but their shielding trick allowed them to reach the next level.

In the Institute, more and more Lycans, including Erika, decide to leave against Lillian's will. Declan MacRae has arrived with the full power of the Sanctuary Network, ensuring everyone's free will is respected. Henry asks Erika what she wants to do now, to which she responds by enthusiastically kissing him. He thinks that's a great start, said with a twinkle in his eye.

Magnus and Tesla enter another level through a voice activated password ("gateway"). A sphere appears, and they soon realize that it is a map not of an alien world but of "hollow earth", of an array of tunnels underneath the continents that could lead them to the center of the Earth.

Retrieved from "https://sanctuary.fandom.com/wiki/Animus?oldid=16070"
Community content is available under CC-BY-SA unless otherwise noted.