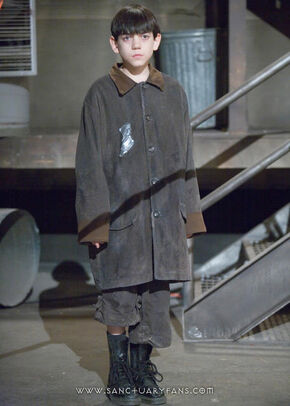 Male
Age
10
Status
Alive
Species
Abnormal
Abilities/Gifts
Snake like limb
Family
●   Mother:
(Adoptive) Jagna Lutrova
Portrayed by
Cainan Wiebe
First Appearance
●   Web Series:
"Webisode 1"
●   TV Series:
"Sanctuary For All"
Alexei is a young Abnormal first encountered shortly before Dr. Will Zimmerman joined the Sanctuary Network. His abnormality is a snake-like extra limb that can easily kill people, but acts as a defensive mechanism when he is afraid. He is said to be a result of the radiation from the Chernobyl disaster.

Tests on him revealed the extra limb is a massive genetic mutation incorporating bone, flesh and cartilage, but it does not appear to be parasitic and is actually symbiotic. It is also vaguely self-aware and can act on its own without Alexei's consent when he is scared; attacking any immediate threat with a radioactive tip. Alexei himself doesn't appear to be affected by the radiation. The limb is also very strong, as it could pull him across a ten-story building.

The limb is attached to Alexei by what look like a form of pouch in his side where it most likely receives nutrients when Alexei eats; though the tentacle does have a mouth and teeth it may be possible that it can eat on its own. When the tentacle is not stirred or defending Alexei it will rap it self around his chest.

Fearing he would be taken away and experimented on by the government, his parents, who loved him deeply, sent him away to America for his own protection. As Helen explained, many children like Alexei are adopted by well meaning immigrant families and many of them have certain problems either mental or physical. Alexei's problem however caused him to be shunned by his adopted family especially when their fear kept agitating the tentacle. Also, the family who adopted him were religious, and this caused them to see Alexei like some kind of a demon or monster. They kept him hidden and locked up in a room in their apartment, only letting him out to eat.

He eventually came to Helen's attention when the bodies of a police officer and an old man in the family were discovered with an their heads impaled. Alexei hadn't meant to kill the officer and had been hiding under his bed after accidentally attacking the old man who may have yelled at or attacked Alexei causing the tentacle to come to his defense. When the officer came in, the trauma of the event and his own fears as well as the officer yelling at the already frightened boy caused the tentacle to lash out blindly striking the officer who it perceived as a threat to Alexei. It should be noted that Alexei did try to warn the officer not to come close to him as he was already very scared and the tentacle was already out hovering around him but the officer couldn't see it. After this event Alexei fled the house and began to live on the street.

He was eventually caught by the Sanctuary where Will recognized that he was not a danger, but just a scared child with a power he could not control.[1]

Retrieved from "https://sanctuary.fandom.com/wiki/Alexei?oldid=21438"
Community content is available under CC-BY-SA unless otherwise noted.