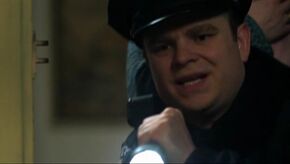 Albert Russo was a police officer in the OCPD.

He was the second victim killed by Alexei's symbiotic appendage, following after Jagna Lutrova's father. Russo's death resulted from him losing his patience and yelling at Alexei when Alexei refused to come out from under the bed. His body was sent to the Old City Hospital morgue where Dr. Helen Magnus performed his autopsy.[2] [3]

Retrieved from "https://sanctuary.fandom.com/wiki/Albert_Russo?oldid=21437"
Community content is available under CC-BY-SA unless otherwise noted.