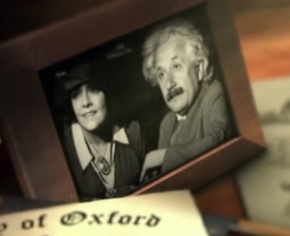 Albert Einstein was a German-born theoretical physicist who discovered the theory of general relativity, effecting a revolution in physics.

For this achievement, Einstein is often regarded as the father of modern physics. He received the 1921 Nobel Prize in Physics "for his services to theoretical physics, and especially for his discovery of the law of the photoelectric effect".

Dr. Helen Magnus met him at least once, and a photograph of that meeting was made.[1]

Retrieved from "https://sanctuary.fandom.com/wiki/Albert_Einstein?oldid=21531"
Community content is available under CC-BY-SA unless otherwise noted.