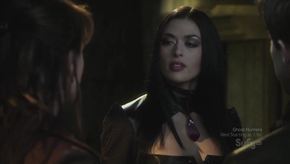 Afina was the last queen of the vampires. Like most of her kind, she desires world domination, and longs for the days when vampires again rule the world, just as they used to. Nikola Tesla ultimately dubs her "An entitled stuck-up inbred bitch with a Nazi complex".

Given that they were all immortal and ambitious, Afina and her family members took turns ruling their kingdom, with some of them entering stasis while the others ruled (to stem instances of her ancestors committing acts of familicide and parricide, etc.). Afina was supposed to be revived by her brother Kalmin after a few centuries, but he never did; leaving Afina to remain in stasis during the time of when the vampires fell and throughout the entire current rule of humanity.

Some time after the discovery of Hollow Earth in early-2010, Dr. Helen Magnus and Nikola Tesla found Afina's tomb in East Africa while exploring Praxian ruins, unaware that the vampires had taken over the stronghold after the Praxians retreated. Magnus inadvertently revived Afina in order to save the injured Tesla's life. Though initially cordial, the vampire queen quickly turned on them, willing to once again rule the world and use Magnus as an immortal source of fresh blood. When she tried to awaken her court -- which consisted of several hundred warriors -- Magnus made a deal with her to give her the key to finding a way into Hollow Earth in exchange for sparing the surface. Afina agreed, and was given the Holomap and the password needed to access it. Magnus, however, did not inform her that the map was booby-trapped against vampires, and thus activation by Afina lead to the entire compound being destroyed by a large explosion reminiscent of a small-scale tactical nuke. It was not shown if Afina actually died in the blast, but based on a lack of future character appearances and the fact that she was standing right next to the device, it's pretty safe for viewers to assume that Afina as well as the rest of her court were blown to smithereens.[2]

Retrieved from "https://sanctuary.fandom.com/wiki/Afina?oldid=20713"
Community content is available under CC-BY-SA unless otherwise noted.