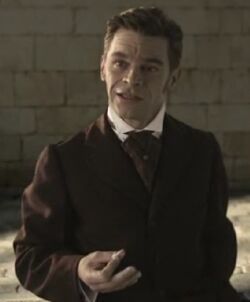 Adam Worth is a highly intelligent and dangerous scientist who was a classmate of Helen Magnus and The Five back in their Oxford days. He also became the basis for The Strange Case of Dr. Jekyll and Mr. Hyde and was one of the few humans who are aware of the location of Hollow Earth.

In Oxford with the Five

Adam studied at Oxford at the same time that the Five were studying and came together. Like the Five, Adam was a genius ahead of his time, but his experiments were more dangerous and twisted, as noted by Nigel Griffin. One such experiment involved forced cell regeneration that resulted in a test mouse growing a second head and dying painfully.

Adam attempted to join the Five during the early Source Blood experiments, having spied on them for several weeks. While he was unaware of the true nature of their experiments, he said that they could use a person like him on their team but was refused. While the Five did acknowledge that he had the potential, they felt the group was large enough and they (Helen in particular) were concerned by his abhorrent behavior and experiments.

Helen later discovered that his experiments were verging on biochemical warfare when she caught him writing an equation for a deadly poison. Brushing it off as a simple equation, he pleaded with Helen to join the Five. She refused again, stating that they were on different scientific paths.[2]

Adam would approach Helen and Dr. James Watson some years after their time in Oxford to ask for their help with his daughter, Imogene Worth, who was suffering from a terrible disease. The pair eventually discovered that the girl was suffering from Leukemia and that there was little that could be done. Adam pleaded with Helen to use her "blood experiments," but Helen refused, because the Source Blood had been hidden and if used it could potentially kill a child in such a weakened state of health.

Nevertheless, James and Helen worked tirelessly to save Adam's daughter but the disease won out in the end and she died in her father's arms in the night. The trauma of this triggered a psychotic break in Adam. A secondary Hyde personality developed within him, born from his rage over his daughter's death and his perception that Helen murdered his daughter.

For the next decade, the two personalities amassed a small empire through the combination of their intelligence and ruthlessness. The government eventually became aware of his activities when he stole a large quantity of cyanide and they came to believe that he would use it as a weapon.

The government were forced to enlist the aid of the Five to hunt down and kill Adam. Helen shot him after tracking him to a cliff at an undisclosed location, where he fell over the edge. Eventually it was revealed that John Druitt saved Adam in order to force him to reveal the location of his safe houses - Druitt wanted to utilize them for when he went on the run himself and once he had their locations disposed of Adam in the canyon.

John failed to realize that Adam drifted along the waterway onto the site of a civilization of abnormals that even Magnus was unaware of, who used their highly advanced technology to revive him.[2]

Looking for the City

In 2010, Adam sent two of his abnormal allies after Will to obtain information on the Holomap. Through the technology that they were using, Magnus discovered the city herself.[3] Having survived into the present day using the technology of his new abnormal allies, Adam trapped Magnus inside a time dilation field to recover the information she had on the city. While inside the field, he used a device that allowed him to travel through time and space in a form of teleportation. After a long brutal fight Magnus was able to destroy the power-source for the field, thus she and the team were able to escape.[4]

Adam was then imprisoned in the Sanctuary's medical ward where he was treated for injuries sustained during the fight. He stalled for time by telling his back-story until it was revealed that complications with his teleportation technology were killing himself and Magnus. Left with no other choice, he played his final card, revealing that the cure to their condition was in the underground city.[2] He explained that certain Keystones would provide the location of the underground city's entrance - when combined with the holographic city map that Magnus had been studying. After tracking the Keystone to an abnormal collector of radioactive items (because Keystones produce 2.2 radds of radiation), Magnus successfully tracked the location of the entrance to a temple in the Tibet mountains. Tesla informed them that only one member of the remaining three members of the Five could safely enter the city by using a device of his invention that cloaked their vampiric blood traits (he could only produce one viable device).[5]

Despite Magnus specifically stating that Worth should not go anywhere near the city, Druitt and Tesla decided that his services were required to rescue Magnus and her team. Using the device previously used on Will, they discovered an unshielded location in the city's underground network that Druitt could teleport into. Druitt then forced Tesla to stay behind while he and Adam teleported into the city to rescue the search party. However, once they were so deep into the caverns that John could not teleport out, Adam set his abnormal allies onto John and captured him.[6]

An A.I. version of Adam Worth was created when the Old City Sanctuary's computer system became infected with a Sentient Organic Nanite left over when Henry Foss stumbled upon a hidden network placed by Nikola Tesla.

Dr. Helen Magnus and Tesla hooked up to the virtual reality to isolate the nanite, and encountered the Adam A.I. there. It initially seemed to be docile, contrary to the personality of the original Worth. When they tried to leave the virtual world, however, the A.I. tricked them, revealing itself to be equally as unstable as the original Adam. As time passed the A.I. began to recover the original Adam's memories, becoming even more unstable and violent.

While in the virtual world, the A.I. possessed the ability to change whatever he wanted, like giving himself the powers of a Vampire, forcing Magnus to see images of her daughter, changing the environment to whatever he wanted, and creating electric shocks from his hands.

It was eventually tricked and rendered powerless in the virtual world, where it was to remain indefinitely.[7]

Adam suffers from Dissociative Identity Disorder and, according to Will's observations, he is a textbook sufferer of the mental condition. It is implied that he showed signs of the condition in Oxford in the form of mood swings, short temper and according to James burning down a lab, an incident he claimed was an accident.

His condition escalated when his daughter Imogene died of leukemia. Prior to this, he had tried desperately to cure her on his own, but was unable. He then sought out Helen and James and the future UK Sanctuary to ask for their aid. Both went to the hospital to see if they could be of service but quickly discovered that the girl was a severe case beyond their help.

Telling them there was little that could be done, Adam tried to inquire about the "blood experiments," but Helen refused saying it was too dangerous to perform on a child. The pair did everything they could, but ultimately the illness claimed the child.

After that Adam's psyche fractured into two distinct personalities, the originally benign intellectual Adam and a violent darker personality born from his rage over the loss of his daughter. The dark personality would eventually come to dominate after bullying Adam into submission under the pretense of protecting him. This dark personality came to despise Magnus, who it viewed as having murdered Imogene and attempting to murder Adam when she had shot him to stop him from waging war on London with deadly poisons.[2]

He is featured in:

Retrieved from "https://sanctuary.fandom.com/wiki/Adam_Worth?oldid=21387"
Community content is available under CC-BY-SA unless otherwise noted.