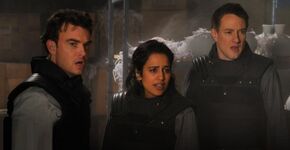 The team is reunited with Kate.

"Acolyte" is the tenth episode of the fourth season of Sanctuary, and the fifty-sixth episode overall in the series.

Trouble from Hollow Earth leads to a reunion ... and an unexpected betrayal.

Dr. Will Zimmerman and Declan MacRae race through a forest in a jeep when they come across a road block. They leave the car behind and run into the woods, to a point where they can oversee an extensive facility overlooking a cliff. Will calls Dr. Helen Magnus over the phone to "get out of there", but in the next second, they watch in horror as the facility is destroyed by a huge explosion.

Three days earlier, Magnus and Will discuss the somewhat disgusting eating habits of some Abnormals, when Henry Foss intercepts them, telling them Declan is on the line. The head of the UK Sanctuary has an unexpected guest: Kate Freelander has returned to the surface with news from Hollow Earth. Sephis, an abnormal refugee has informed her about an upcoming terror attack by the abnormal insurgency on a human research facility.

Will travels to London and meets up with Kate. They interrogate Oren, the abnormal terrorist Kate's contact got his information from. He refuses to reveal anything, and says he hopes they all die.

In Old City, Henry tries to hack into some intelligence databases, but keeps being kicked out.

Declan shows Will and Kate a surveillance feed that leads them to an apartment where human and abnormal corpses are piled up. Someone got to the group before them.

Magnus suggests that the insurgents themselves killed all non-essential personnel before moving on with their plan. Kate finds a shipping document with only the letters "sboa" still readable. Magnus quickly deduces the word is "Lisboa", the Portuguese form of Lisbon.

Kate tells Will that she has missed the sunlight, but that she loves the pioneer spirit that has gotten into the Hollow Earth abnormals. Will also suggests that Garris has something to do with her decision, but she changes the subject.

Henry hacks into the Portuguese SIS's database, and finds a lead to Greg Addison, the UN's primary agent to deal with the abnormal problem. Hagan Kiersted, Mashita Narumi, and other abnormal dealers are also on the list. It looks like they all get together in Lisbon to consolidate under the banner of the SCIU. Magnus says they must warn Addison about the upcoming attack.

In London, Will and Kate tell Oren he is free to go, but also show him photographs of his murdered companions. He finally agrees to help them, and tells them about detonators his group has been sending to a sister group in Portugal all week.

Greg Addison is on the phone in his office when he hears sounds of a struggle in the hall. Magnus has taken out all his guards. Once inside, she informs him about the upcoming attack. He in turn shows her photographs of Bigfoot with the terrorists, suggesting that he is the new leader of the insurgency.

Magnus protests Addison's accusation, and tells him Bigfoot would never betray her. He in turn tells her that he will go after her friend, and her as well, if she gets in his way.

Will agrees with Magnus that Bigfoot would never do what he is accused of doing. He, Declan and Kate lead a raid on the insurgents in Portugal. A firefight ensues during which one of the insurgents tries to blow himself up. Will shoots him just in time.

Magnus meets up with Henry, who tells her he did everything to clear Bigfoot's name, but instead, he has discovers a video in which their friend swears loyalty to the cause of the abnormal insurgency. Shocked, Magnus goes to see the Crixorum, the super-telepath they are holding in one of their security cells. Henry argues that the man is in a drug-induced coma, but Magnus proves him wrong by threatening to vent the oxygen from the cell. Suddenly, the creature gets up and asks, "What took you so long?"

The Crixorum explains that Bigfoot was the only one who got inside the protective shield around his cell on a regular basis, thus enabling him to subtly change his neural pathways. The re-mapping is permanent; not even the Crixorum can change it back.

Will believes that there is too much evidence for the terror attack in Lisbon, and that it is just a decoy. Magnus suggests that the SCIU summit is actually taking place somewhere else, and Henry soon verifies this when he finds out none of the people who booked flights to Lisbon actually boarded them. However, the misdirect did not work, and the insurgents are on their way to the real site.

Magnus goes to see the Crixorum again. She tells him that she has found out about the Praxians trying to wipe out his kind 200 years ago, and that they also found a way to neutralize their powers by removing the Iduary Gland, a specialized organ in their brains. He angrily tells her that these operations where barbaric, but she tells him she will perform one anyway.

Magnus calls Will; she has learned that the actual summit is taking place at the Gran Atlante Hotel, just outside of Buenos Aires, and is already on her way there.

A video of Bigfoot shows him announcing his intent to end the "tyranny" of the surface-dwellers, and the end of his own captivity among them.

At the Gran Atlante, Magnus tries to warn Addison again, but he is confident that the security measures he put in place will keep the summit safe. He is wrong however, as Bigfoot and three of his fellow insurgents are already inside, cloaked by the abilities of one of their own. Bigfoot sends them off to the elevator shafts they are to blow up, citing their battle cry, "From Below We Rise".

Magnus and Kate fight their way into the hotel just as Addison gets news of a security breach and finally decides to evacuate. Magnus finally confronts Bigfoot, who is convinced he has always detested her. She tells him that she is his oldest friend, and that he must take off his suicide vest. He seems insecure for a moment, but then tries to pull the trigger anyway. However, Kate knocks him out from behind, and they rush to get him out of the vest and to safety.

Minutes later, Will and Declan watch as the hotel is blown to pieces by the explosions. They try to contact Magnus and Kate, who are badly wounded.

A week later back in the Sanctuary, Kate wakes up with a headache. Magnus had to operate on her twice. Will informs her that eleven people were killed in the destruction of the Gran Atlante, and world leaders are now calling for an all-out war on the abnormals. Will also notes that she is wearing a promise band, the Herusan equivalent of an engagement ring.

Meanwhile, Magnus is using Sally, her telepathic mermaid friend, to return Bigfoot's original personality. They are successful, but the Big Guy feels terrible about his actions. Magnus also feels responsible, as it was her decision that led him down this dangerous path. Bigfoot wants Henry to get supplies, but Magnus suggests him to go instead.

Some time later, Bigfoot arrives at the address where he is to get the supplies. He meets up with more insurgents, who take him inside as he utters, "From Below We Rise".

Kate, Will, and Declan

Will, Kate, and Declan

Kate, Declan, and Will

Will, Declan, and Kate

Retrieved from "https://sanctuary.fandom.com/wiki/Acolyte?oldid=21826"
Community content is available under CC-BY-SA unless otherwise noted.